Pierce students bond as they struggle to pass symbolic logic 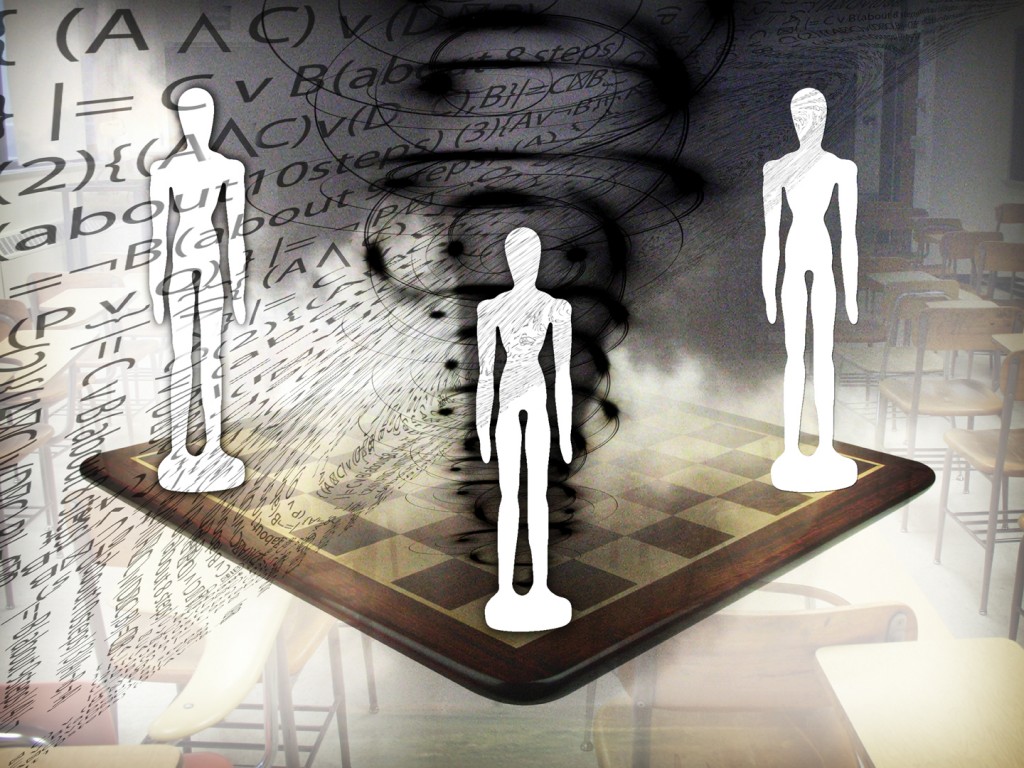 Failure was not an option.  They were horrified. Many visibly trembled, others began to cry.

Panic stricken they received the results of their first quiz.  Graduation this semester was at stake.  Jordan Dorn, calmly looked at the frightened faces of his friends and feared they would fail.

“Get used to being uncomfortable,” warned Professor Mia Wood. The class was Philosophy 9 Symbolic Logic.

Understanding Symbolic Logic was like understanding the fine print in a long legal contract.

Jordan knew almost instinctively that x(an(x)Mortal(x)) meant, “all men are mortal.” Bored with the trivial statement, he quickly popped an Oreo in his mouth, grabbed his mobile phone and began another round of his favorite game “Angry Birds.”

Unlike his homework, Angry Birds was challenging. After all, he was a math and science guy.  He didn’t know how or why he knew, he just thought that way.  It was like riding a bike.  He couldn’t explain it; he just did it.

Unlike everyday “natural” language, which includes emotion, slang and personality, symbolic logic forced the students to communicate in black and white, using a system or code, like robots.

Basketball players, using natural language, talk smack on the court to sway other players. Computer programmers and lawyers use codes and rules, such as using coupon codes to get discounts or laws to negotiate their point. Jordan understood both languages, he was bi-lingual. Gabriel and Angela were not.

Week 1: “Atomic Sentences.” “It was the hardest class I have ever had,” Gabriel Gasabyan exclaims.

That first week Gabriel, who was normally laid back and funny, was so angry he wanted to punch through his computer screen.

“I thought I understood it in class, but when I got home, it was like total

Jordan, on the other hand, would try symbolic logic problems and, “it worked.” Then he would play “Angry Birds.”

Jordan didn’t care that he understood the class. He wasn’t aware that understanding the language of symbolic logic gave him the power to think like an attorney, philosopher, or mathematician and better distinguish true statements versus half-baked stories.

Using this power he could “tear to pieces the flimsy illogical arguments which (he would) continually encounter in books, in newspapers, in speeches, and even in sermons,” said symbolic logician Lewis Carroll, author of Alice in Wonderland.

Week 3:  “Boolean Connectives and Tautologies.” Angie clearly remembers statements such as ¬(A (¬ A (B C)))  B.  That week Angie cried herself to sleep every night.  She was traumatized.  She thought she understood the language and was ready to learn; instead she was given more symbols, more rules, more codes, more stress.

The friends formed an elite task force to combat symbolic logic.  Jordan was tasked with teaching his friends.   He didn’t even know how he understood the language. How would he teach others?

They met at Starbucks early in the morning, multiple times per week, to swap stories about how confusing the class was.  Each meeting, visibly sleep deprived, the partners would quietly arrive and order their signature power drinks, all Venti, of course.

By week six the group had grown:  they had four laptops, two for the men and two for the women. Some days the group would study all day; when one of the partners left for class or work the others would stay and work on problems until they returned.

“I would finish [the problems] first, then we would work together and cross reference it. I ended up teaching them a lot,” Jordan says modestly.

The partners began to adopt a strategy. “In class, you had to pay attention. Some things could be vague and when the professor broke it down you had to be alert,” says Angie. “I would drink a Red Bull before each class, it made me alert.”

From that point on, no class was attended without Red Bull in each of the student’s utility belts. Jordan, however, preferred Oreos & Angry Birds, as his personal study aids.

Collaboration became a ritual … in Starbucks, on Facebook … anywhere.  One afternoon before class, the team drew a chessboard like grid on the sidewalk outside Room 1300. Using the symbols, like miniature soldiers on a military map, the students were able to visually formulate strategy and deduce answers to their questions.  Jordan’s teaching was proving effective.

The process was straightforward, like putting together furniture from Ikea.  They had to break down the package and separate the pieces before they could put the furniture together.  Understanding the rules, and how and when the pieces fit together, was key.

As the weeks progressed the level of difficulty increased, and the team began to adopt the vocabulary of symbolic logic, even in romantic settings.

On one occasion a classmate told Jordan, “If your premise is true, you must be thinking about me,” Jordan responds. “And thus your statement is valid.”

On the last day of class the team was equipped with Red Bull, Oreos, and Starbucks.

They entered the classroom prepared to combat the whirlwind of symbols. This would be the hardest battle, but they were a well-prepared team.

They attacked, hurling themselves into the structure of symbolic logic. Each symbol a struggle, each properly solved problem a triumph.

Jordan had become the “Big Brother.” If it weren’t for him, Room 1300 would have won the battle.

Although the friends now better understood the language of symbolic logic, they seemed to most treasure how the team experience enriched their lives. Ironically, Jordan still wasn’t sure how he understood or would use symbolic logic in his life.

After it was over, Jordan picked up his cell phone, and turned on Angry Birds.  He placed the Black Bird into the slingshot, understanding the important variables of the scene.

He made his calculations and fired.

The bird tornadoed through the air and exploded, perfectly shattering the frighteningly complex structure that housed the evil pigs.

Problem solved. Advance to the next level.