Home Uncategorized One Dog at a Time 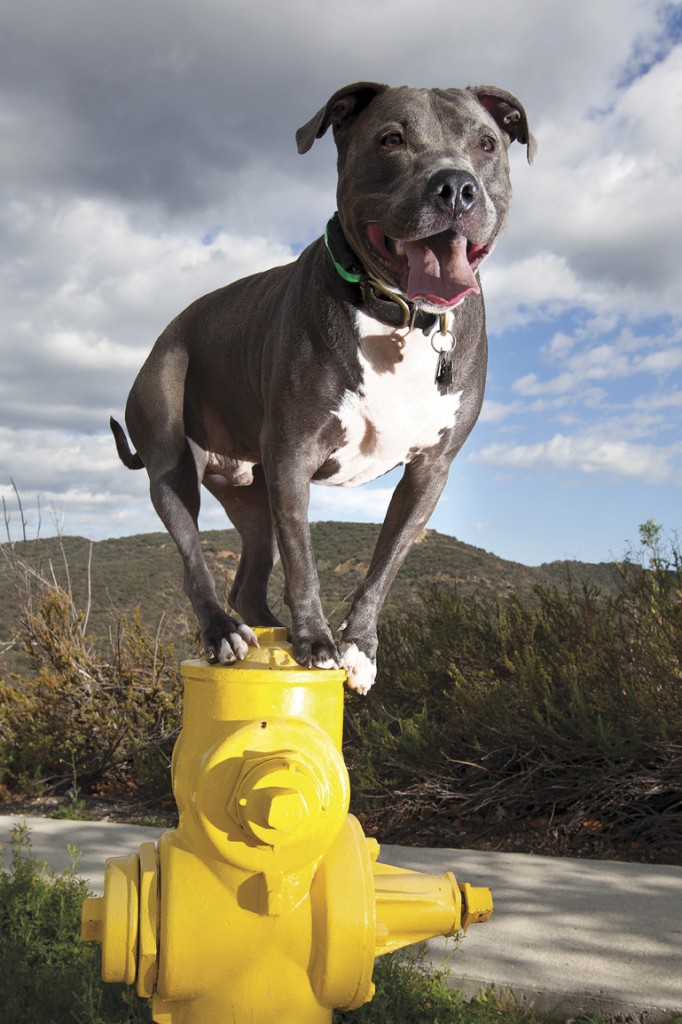 Baking in the hot sun, the brown haired pit bull had been left to fend for himself. He had been driven to the deserted parking lot a few days ago by his owners and tossed out of the car. Left to wander the North Hollywood parking lot by himself, the dog retreats into an abandoned bus.

A solidly built, brown, pit bull terrier trots onto the bus and soon emerges with the stray dog in tow.

Tito, dubbed an “animal ambassador” by his owners, Annette and Troy Smith, spends his Saturdays helping train other pit bulls in a shady corner of the Van Nuys/Sherman Oaks War Memorial Park.

“Come,” says Troy, as he steps out of his pickup during a recent weekend carrying a bucketful of dog toys.

Pit Bull terriers, with their reputation for ferocity, were once known as nanny dogs; they guarded our nation’s children.

Today, Annette and Troy are working hard to dispel what they say has become the unfair myth of the violent pit bull.

After moving from San Francisco a year ago, Annette and Troy started Los Angeles Responsible Pit Bull Owners (LARPBO). Their group has grown to 159 members.

The Smiths also lead socialization walks where they gather with other pit bull owners. Tito trots out from the pack and intercepts any stray dogs to protect the other pit bulls and keep them calm.

“After a rescue, nobody knows their dog,” says Annette. “They get home and realize they don’t know what the problems are.”

“Normally, when you walk down the road with a dog like this, people cross the street,” said Kari Shulman, owner of a white pit bull named Bela. Bela comes to LARPBO to work on her socialization and training problems.

The aggression issues normally associated with the breed usually show up around two-to-three years of age, after they reach maturity, which is why LARPBO focuses solely on the owner, not the animal.

“Everybody wants you to get a dog, but then there’s no support,” says Troy. “It’s hard to find a good trainer.”

Troy teaches the dogs to always look to their owner for direction when they are outside on a leash. This takes the decision-making ability away from the dog and places it in the hands of the human.

“Sit,” says Troy as he walks backward holding Tito’s leash while maintaining eye contact with the dog who is eyeing the Frisbee under his arm.

This training allows Troy and Annette to encourage their dogs to take the Canine Good Citizen (CGC) test, which evaluates the animal’s behavior. Dogs must complete a test in which they greet humans and other dogs without lunging.

Troy’s teaching method has garnered a lot of attention. Caesar Milan, aka The Dog Whisperer, invited Tito to participate in this year’s Dog and Pony Show. Where dogs and ponies perform together, during a comedy routine at the Del Mar fairgrounds in San Diego.

“Stay,” says Troy as he walks backward away from Tito and drops his leash. The dog keeps his eyes locked on Troy as he lowers himself to the ground.

One important tip Troy and Annette teach is never to let two dogs meet for the first time by coming nose to nose but instead to greet each other from their owner’s side in the “heel” position.

“It’s like me coming at you with a knife,” says Troy. “It’s the most aggressive form of meeting.”

A fit of barks and growls erupts from Troy’s corner of the park and he spins around to eye the dogs and owners in question.

Troy also owns and operates For Today’s Canine, a company that trains all breeds of dogs, but LARPBO concentrates on the misunderstood pit bull.

Tanaya Burnham and Ryan Delorey attend LARPBO training because it’s free, with the Smith’s asking for a $10 donation.

“With LARPBO and all the other groups, pit bulls might wind up to be the most socialized breed,” says Stephanie Federoff, another pit bull owner. “It’s not just this breed, all dogs need this.”

As the afternoon wears on, Troy finishes his latest class and sends his students home; he’s already preparing for next week when he’ll concentrate on socialization methods.

“Truck,” Troy commands Tito, as he holds open his passenger side door.

Tito will be back next week to help other pit bulls learn the ways of humans.

Dogs like Tito really are a gift to us humans. They are unquestioningly loyal and can put on displays of compassion that would put many of us to shame. This is why it is important that we are protective and proactive regarding their health. Choosing a pet insurance provider can be tricky, but using petinsurance.review can make this decision easier.