There exists a long lost isle of the Caribbean, insulated by high-growing greenery and thatched eaves. It’s nestled behind a Northridge McDonald’s, and sandwiched between a barber and a skate shop. The name of this isla perdida…

Here, you can treat yourself to a smorgasbord of delectable food that borrows tastes from every corner of the Caribbean at an affordable price.

The facade is unassuming, and maybe even unappealing in the moments before the establishment opens for business. A wrought iron gate pulled tight across the entrance and slightly hidden behind large potted plants doesn’t give the most inviting appearance.

The sign on the front of the building is somewhat unhelpful when it comes to defining what you can expect to eat there—under the name of the restaurant, it simply reads “Caribbean food.” But once the gates are pulled back and you walk through the doors to be met with the heavy air of spice and the unblinking gaze of a Bob Marley portrait, you’ll begin to think that Cha Cha Chicken is a bit less general than that.

Picking up a menu and noticing that a good portion of the food served is smothered in jerk sauce drives home the thought:

This place is Jamaican.

The order includes oven roasted chicken—either quarter, half or whole—which is covered in the restaurant’s signature jerk sauce, served along with black beans, rice, fried plantains and a red cabbage slaw . The dish can be ordered spicy or, for those of us with more sensitive palates, mild.

The chicken is served bathing in its succulent, amber sauce. When ordered mild, there is an unmistakable twinge of sweetness to the taste… something evocative of tropical fruit like pineapple or mango. The chicken itself sloughs off of the bone with incredible ease; you can easily clean off every morsel with just a fork.

The sweetness of the chicken is complemented by the plantains served with it and offset by the accompanying bed of black beans and rice.

The plantains come with a fantastic texture, contrasting the chicken’s tenderness with a tantalizing firmness provided by the fry. The beans and rice are a welcome departure from the sweetness of the other items, offering tones of garlic in every bite.

Of the items on the plate, the red cabbage slaw leaves the least impression. It isn’t an unpleasing dish on its own, but its sweetness is an unflattering addition to the chicken and the plantains.

As noted before, the menu at Cha Cha Chicken offers a diverse selection of items, most containing a Jamaican spin. From tostadas to flan, the restaurant’s menu certainly explores the Caribbean

The Mulato Cubano sandwich marries the distinctive taste of two countries in an interesting way. The sandwich is, for the most part, reminiscent of the Cuban staple;  Cuban roll, mustard, pickles and cheese. However, instead of ham and roast pork, a spiced, shredded chicken breast is the main protein of the sandwich.

The roll is delectably toasty; it doesn’t soak in the condiments and juices of the ingredients and become a sopping mess, so the sandwich stays together as you enjoy it. The chicken inside is a spicier fare than what you get with the Cha Cha Chicken plate, tasting more of what you’d expect to find in an enchilada… though it is no less tender. Though the taste isn’t as distinct as the Cha Cha Chicken plate, the Mulato Cubano is still a satisfying meal.

And, if you find yourself craving Carribean cuisine, you don’t even have to eat at Cha Cha Chicken; the restaurant offers takeout and delivery options as well as sit-in dining. So, why not take a cha-cha-chance with Cha Cha Chicken?

Many entrees are reasonably priced, but some do teeter into the expensive side of things; they range in price from $6.75 to $12.95. 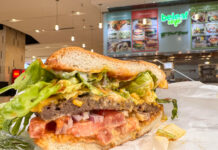 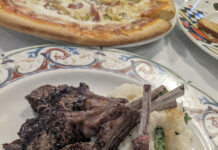