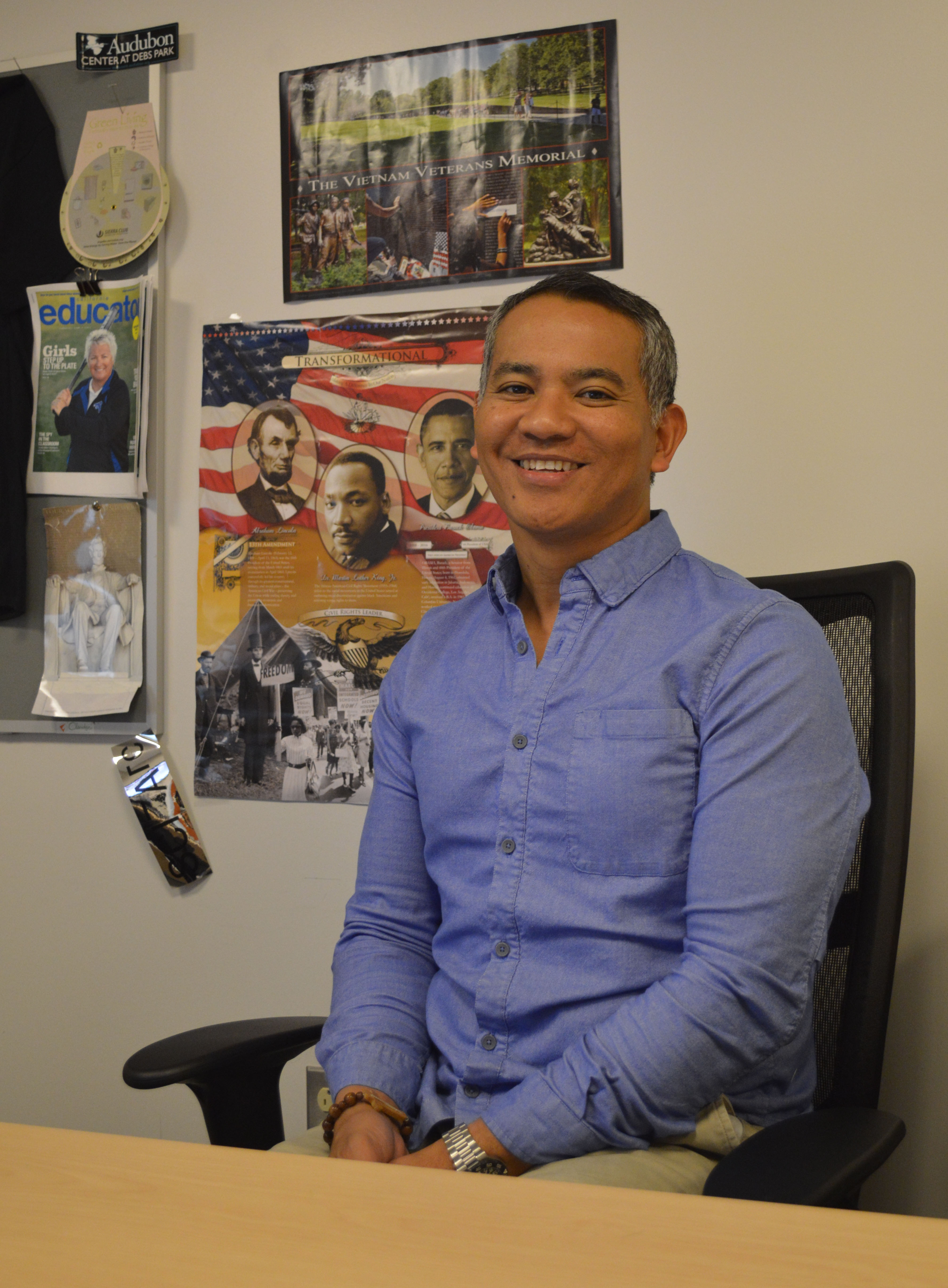 Dr. Jose Abara sits in his office on Feb. 28, 2018. Photo by Martin MoranHuddled in a cabin-snug office in the ELM building, Dr. Jose Abara of the Psychology department is surrounded by posters of monumental American figures and pieces of Pierce memorabilia. An alumni of CSUN and the University at Buffalo, the doctor of behavioral neuroscience has learned and lectured across the United States. He claims inspiration in his field by a family history of alcoholism and has prevailed in gaining knowledge since his high school years, working with Students Against Drunk Driving.

Abara finds it pivotal to connect with his students on a personal level.

“I pride myself in being able to appreciate my students and who they are and incorporate those individual differences,” Abara said.

From personal experience with the psychology and statistics professor, student Rodrigo Perez describes Abara as a “friendly” and “motivated” teacher with his approach to lecturing who cares about what he teaches.

The environment of his classroom coincides perfectly with his ability to provide a caring and intimate education. Several lab tables with rainbow colored displays of the human brain are spread about in ELM 1723, the lab connected to his office, and allow Abara to walk easily and speak from any corner of the space.

The doctor’s globe-trotting span of education even reaches slightly south of Woodland Hills to UCLA, having volunteered there to observe the genetic aspects of alcoholism, Abara has wide reaching experience and teaching in the fields of drug abuse and addiction.

Even with his approach to humor in the classroom during lecture, Abara gives a sincere and personal stance on a quote he would often evoke with glee, claiming Pierce as the “Harvard of the West”.

“In my classroom and my observation from other faculty that we have a great level of ability to engage students in discussions and involve them in critical evaluations of topics,” Abara said.

Comparing on the degrees of schooling between New York and Los Angeles, Abara cites how both prove quite rigorous with their expectations and advanced programs.

“Both are very strong in their academic preparation,” Abara said.

The professor was provided much support from the Cal State University Northridge faculty and commended their diversity. It was with the African American department there that he learned how to write. With the University at Buffalo, Abara shares how their training was “specific” and “particular” because of the program.

Narrowing down on his favorite part about Pierce College, he joyfully admitted that it is the students, for always coming to class prepared with their “drive and determination; perseverance”. This undoubtedly supports his Harvard state of mind with the campus of the bull and how even the high caliber teachers here follow their pupils’ footsteps passionately.

“It just imposes faculty and staff to match those characteristics of our students,” Abara said.

A key trait he provides within lectures are the recalling of personal events and encounters that end up tying into the topic of that day. One such being an incident that occurred to him with an owner of a Toyota Prius. This unfortunately caused a negative bias against the mid-size hybrid for some time. When brought up, Abara admitted to now actually owning that once despised vehicle. A turn of events that gave way to a new understanding and appreciation.

“One can actually be able to appreciate how beautiful it is that we did not know what it was. So to know what it is, is to be open minded,” Abara said.