Story by Calvin B. Alagot 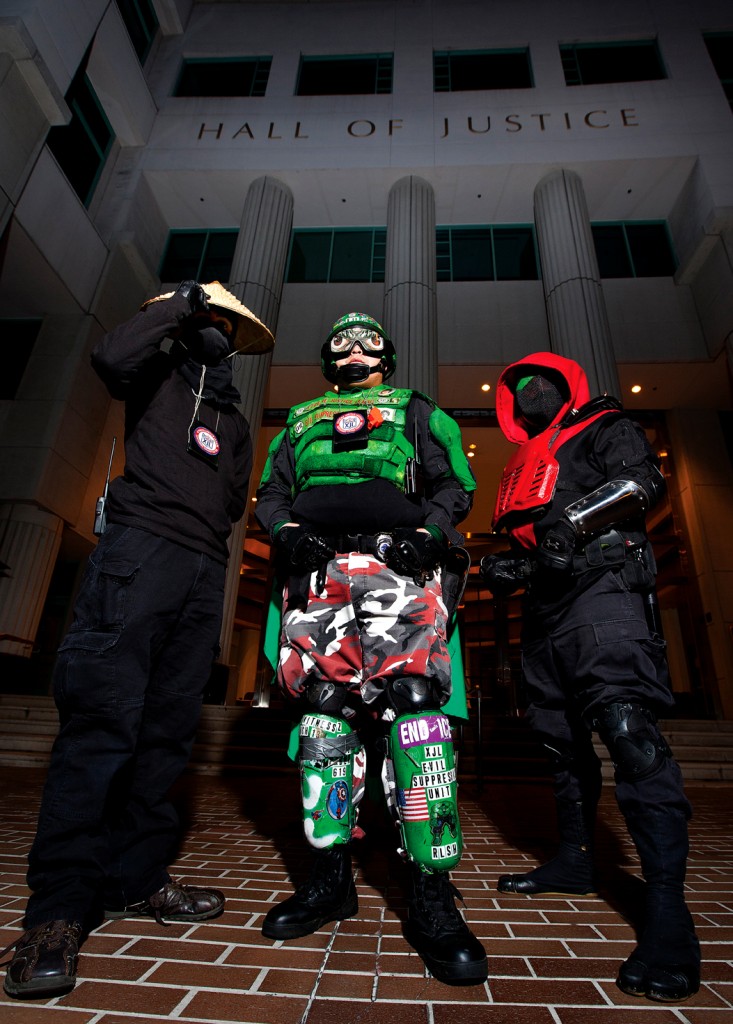 A full moon oversees the historic heart of San Diego in Downtown. These 16 blocks, known as the Gaslamp Quarters, are lined with bars and clubs overflowing on the sidewalks with the loud and rowdy celebrating Spring Break.

With so many bad decisions waiting to be made, anything can happen. But luckily for these folks, the Xtreme Justice League doesn’t take breaks.

The XJL emerged from the shadows in 2006 with one man and his do-well intentions. Known only as Mr. Xtreme, this security guard turned costumed crime-fighter has gone from providing those in need with supplies to organizing foot patrols in search of crime.

Since the league’s culmination six years ago, they’ve come to star in the HBO documentary “Superheroes,” highlighting masked vigilantes across the country. The league has also caught the attention of local news station, NBC 7 San Diego, for members bizarre appearances and services to society.

As unusual as these masked vigilantes may seem, the XJL is but a small chapter of a much larger international, crime-fighting organization known as Real Life Superheroes. This online network of undercover activists discusses tactics, organizes patrols, and recruits new members on RealLifeSuperheroes.org.

These citizen crusaders dedicate much of their time to public safety and spreading awareness to their cause of actively preventing violent crime.

Just a leap and bound away, three members of the league assemble in front of a columned courthouse that is the Hall of Justice right before midnight.

The night begins with a routine equipment check: flashlights, tasers, pepper spray, walkie-talkies and cell phones. After a quick divvying up of duties and plotting an itinerary, Grim takes point leading the three-man troop through the night.

A blue skull mask shields his identity. During the day he installs alarms and lives with his girlfriend of five years. Once a member of the United States Navy as a part of their nuclear program, he stands as the tallest and newest addition to the league. Coming to a busy intersection, he throws a fist over his shoulder, indicating the others to stop.

Urban Avenger and Rouroni stand post at high alert, closely observing their surroundings. The intersection clears, Grim signals for them to cross.

The team moves through the San Diego nightlife, smoothly slipping through the cracks. Time passes and the heroes pass the time with idle conversation, ignoring ridicule of passersby. The night continues quietly with no major events. Posing in photographs and debating about what the ideal cheese-to-egg ratio for an omelet is, seem to be all the action the league will be seeing tonight.

Urban Avenger, reflecting on past patrols, with a tone of reflection in his voice says “80 percent of the time nothing happens, but that other 20. . .” A week later, Urban Avenger and Rouroni run their regular routine meeting at the Hall of Justice. They’re short a man because Grim couldn’t make it due to out-of-town guests that he has to entertain. Only a couple of blocks into their patrol, they encounter a domestic dispute on the outskirts of the Gaslamp Quarter. 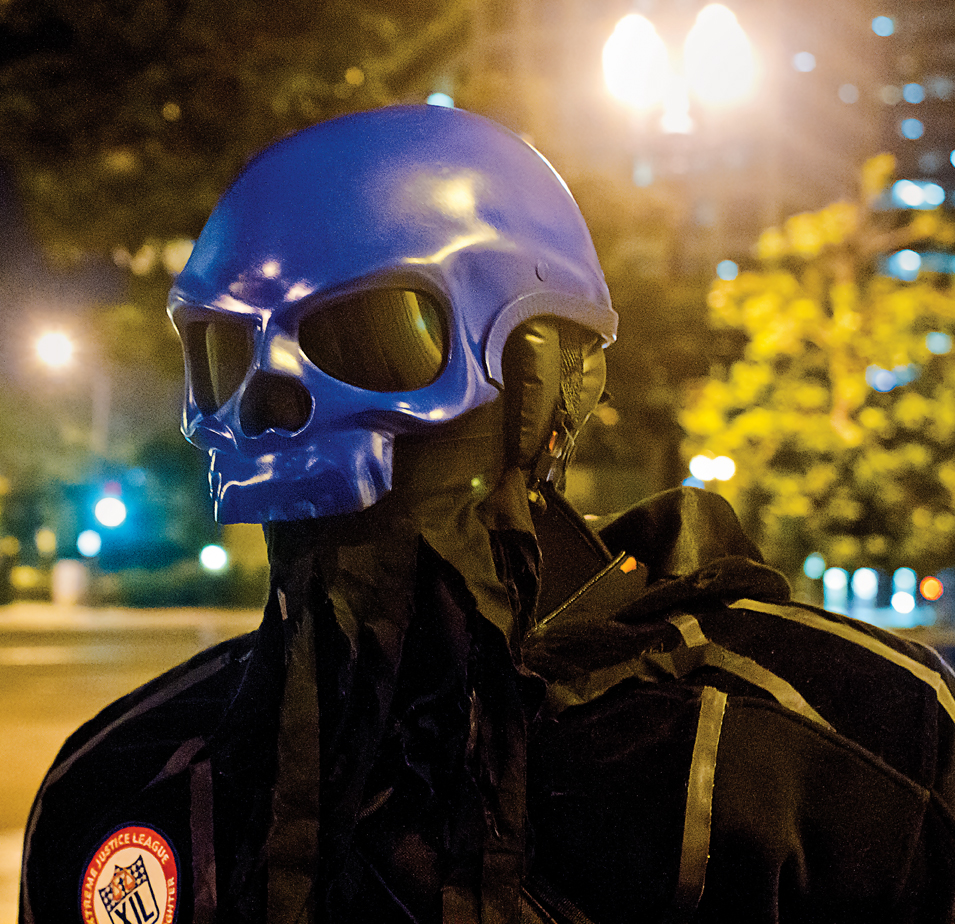 Grim, one of the many members of the Extreme Justice League, goes on partol April 16, 2012 in downtown San diego, Calif. Photo: Jose Romero

A man, violently screaming and waving his arms, towers over a sobbing woman who is balled up against a storefront. The sidewalk spectacle begins to draw a crowd, entertaining commuters waiting for the midnight train. It seems to be a lovers’ quarrel.

Rouroni and Urban Avenger approach with caution. Trying to de-escalate the situation, they assume non-threatening positions behind the unsuspecting man.

Rouroni removes his conical hat, exposing his eyes, leaving only his mask to conceal his face.

“Please calm down,” says Urban Avenger in a cool voice.

The man turns around, startled by the two costumed strangers.

“Please, get him away from me!” shouts the woman named Melissa.

“All I want is my memory card. It has pictures of my daughter on it!” argues the abrasive man named Adam.

Rouroni, crouches down to speak with the woman who is crying. She begins to scream expletives at Adam. Harsh feelings are exchanged. The battle goes back and forth. The complicated couple airs out their laundry up and down the stretch of Fifth Street that runs along metro rail. Urban Avenger and Rouroni shadow them, making sure that things stay relatively civil.

“If things get out of hand, then we’ll call the police,” says Rouroni who spends his days working in an office environment.

“We’re not allowed to conduct a citizen’s arrest on private property unless a felony is committed,” says Urban Avenger. “But even battery is still a misdemeanor.”

During the dispute, a stumbling man with the smell of liquor on his breath expresses concern for the two vigilantes.

“They just look the part,” he says. “If one of them were to pepper spray me, that’s a liability. Vigilante liability.”

The altercation continues on for almost an hour. Ultimately, the two lovers settle down and lower their screams to sore, coarse voices.

“She’s in a hotel,” says Rouroni while Adam smokes a cigarette outside the doors of the lobby. “He won’t start anything in there.”

“The best we can hope for is that he doesn’t get violent and they work it out,” Urban Avenger says.

Adam, apparently stressed, shows his appreciation toward the two heroes for mediating the situation as they walk away. “Thank you, guys.”

Rouroni puts his hat back on. Urban Avenger, who spends his days working in a restaurant, keeps moving forward.

“We’re looking for stupid people,” says Urban Avenger, the most senior member with two years under his utility belt. “I do like 18 hour days. This is the hardest day of my week.”

With the duo drifting through the night, the hordes seem less dense than the week prior, but they have already proved more troublesome.

Urban Avenger crosses the street, while Rouroni takes notice of a minor altercation between a homeless man and a group of young males. The homeless man makes a few racist remarks, but Rouroni’s appearance and presence seem to have scared him away.

Urban Avenger turns around and waves from across the street, unaware of the confrontational situation that almost was.

“He tries to make it to all of the patrols, even if he’s late,” says Urban Avenger as they make their way to the rendezvous.

While waiting for Mr. Xtreme on the corner of East Street and Fourth Avenue, passing people make various remarks.

“I hear those guys be takin’ people out!!”

A fight breaks out across the way. The two spring to their feet and race toward the fight, but before anything happened a police officer disperses the crowd, threatening to deploy his pepper spray.

“They’ve got this,” says Rouroni, with Mr. Xtreme standing casually behind him, appearing out of nowhere in a real Batman-like fashion.

“A fight. Stupid. Especially with the cops right there,” explains Urban Avenger.

Leaving the sprawling chaos, the three move out in tight formation. Urban and Rouroni walk side-by-side through the dispersing party-goers with Mr. Xtreme following closely behind.

“I was the only member for a while,” says Mr. Xtreme. “It really started picking up when Urban Avenger joined in 2010, and then Radnor and Rouroni joined and then Grim joined.”

Bars begin casting their last calls and the streets start filling up with groups of patrons stumbling across the scene.

“There’s a lot of situations that we’ve caught and we’ve dealt with,” says Mr. Xtreme, “but there was also an ample amount where, man…we missed.”

Urban Avenger nods his head in agreement “It’s all about timing. We can’t be everywhere.”

Recently the gang has been limited to Mr. Xtreme, Urban Avenger, Rouroni and Grim, but at one time the league consisted of over a dozen members.

“We’re trying to get more people to join us,” says Mr. Xtreme. “A three man patrol can only cover so much area. If we had like, maybe, three three-man patrols we would have a higher probability of catching a lot more of these situations.”

“The police are understaffed,” says Rouroni.

Mr. Xtreme’s cape, fitted with the XJL logo flows behind him as he strides across the pavement. Stickers of Spiderman adorn his helmet and tributes to rape victims can be seen on his vest as he explains the need for vigilante justice.

“We’ve done quite a bit over these last six years. We’ve saved lives, gone out on a lot of patrols and done a few campaigns. We spoke at City Hall in Chula Vista,” says Mr. Xtreme. “It’s been a fun ride so far, and right now we’re just barely getting started.”

Rouroni nods and adds that he joined because, “It seemed like a good thing to do.”