Red, blue and yellow lights illuminate a 10-square-foot linoleum dance floor in the center of the main room, as the audience watches a petite young woman wrapping rope around a tall, hard-bodied man. With each layer of rope she wraps around his torso she explains to the audience how important it is to avoid “huge owies.” 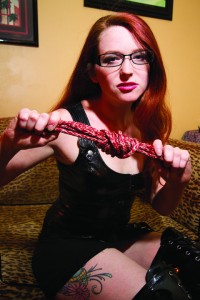 The audience moves in sync with Darren, the demonstration model, as he is pushed, pulled and turned again and again as she pulls the rope over and under itself.

This is the third Friday of the month and the LADS (Los Angeles Dommes and Submissive) group is presenting its monthly “pre-Venus Night Demo” at a local Los Angeles “dungeon.” This night it’s “Rope,” presented by Nikki Nefarious.

Nefarious isn’t your typical Southern Belle. At first glance all you see is a young woman that stands 5-foot, 4-inches, wears her dark-red hair in pig tails that rest upon her shoulders, and rectangle glasses.

“Grab the center of the rope,” she directs the audience. Nefarious holds one end of the rope in her left hand and the other moves down the length of the rope. She then folds it to make a loop at one end. The audience follows with their ropes.

Nefarious, 31, has come a long way since her South Carolina days, where she says “all we had literally was woods and dirt and whatever we could scrounge in the tool shed.” She would play “cowboys and robbers” with the neighborhood kids and professes to have been a tomboy until puberty turned “just a friend” into a boyfriend.

Today she teaches everything from simple harnesses, to suspension (with an emphasis on safety) at a North Hollywood dance studio called The Glass Slipper. She also rigs fetish models for photographs and fetish video, and on rare occasionally does demonstrations. She recently rigged for the “S & M” music video by Rihanna. She is one of the few female rope artists who has earned the respect of her male counterparts.

When she was looking for a teacher in North Carolina and South Carolina she found that most men believed that “girls should be on the other side of the rope” and some even told her that, “Maybe you can watch and learn, little girl.”

Nefarious created a “Bondage Certification” program, which teaches the underlying principles of tying and safety.

When Nefarious was trying to learn the art of rope ties, bondage harnesses, and rope suspension, she discovered that there was a history to this fetish that went back centuries. She discovered Kinbaku.

Master K is one of the foremost experts in Kinbaku outside of Japan. He has studied the art of Kinbaku for almost 40 years and is the author of “The Beauty of Kinbaku.”

“There is a great difference between Japan and here,” says Master K. “Not just in the orientation toward it, but also in the amount of activities.”

Kinbaku dates back to Japan’s Edo period (1603-1868) when shoguns were the police and military forces for the Takugawa family, which ruled the country. The Japanese kept isolated from the rest the world so they did not have handcuffs or shackles. What they did have was rope, from jute to hemp to linen. Rope had a wide range of uses including spiritual rituals and binding and torturing prisoners.

Like Master K, Nefarious’ first concern is safety. She begins classes by teaching students an overview of physiology. She teaches that there are certain areas of the body to never place knots, and to learn what style of knot is best for the weight and body type of the person being tied. She stresses the fact that to avoid physical damage depends on learning safety. Nefarious will soon be including a class in CPR, general first aid and the use of an AED (Automated External Defibrillator) machine in her rope classes.

Nefarious is both a professional rope artist and a “lifestyler (non-professional).” She enjoys the intimacy and sensuality that rope bondage brings to her choice of play.

Nefarious brings a positive energy flow when performing at a local fetish club, tying up a client during a session at a pro dungeon, or simply having fun with a play partner.

“It’s like I had blinders on when she had me in suspension,” says Jonathan Bernanth, Nefarious’ former submissive and play partner.

She learned the tricks of the trade in South Carolina youth, experimenting with her first boyfriend. They unknowingly discovered the fetish of “tease and denial.” Nefarious would tie her boyfriend to a chair and mercilessly make out with him while denying him the ability to touch her.

“We wanted to be pure in the eyes of the Lord,” says Nefarious.

“I would pose them like they were my little human Barbies,” says Nefarious.

Currently, Nefarious has been commissioned by Dungeon Servitus, a San Diego area professional dungeon, to teach the Pro Doms (Professional Dominants) how to rig so they can service the needs of clients that desire a rope bondage session.

Nefarious’ philosophy of rigging transcends merely tying someone up or making a pretty pattern with rope. She puts more than just time and effort into her art; she puts her own energy into what she does.