Home Features The Mic’s the Limit

Aspiring Rapper Realizes the Difficulties of Making it in L.A.

A chubby, baby-faced Midwestern man, Chester Lovegren stepped up to the microphone, dressed in a wardrobe inspired by ‘90s hip-hop. The black T-shirt reads “Captain Morgan” in light, gold cursive letters. A pair of black gym shorts with gray stripes extends past his knees. Black high socks match his black Nikes with the signature swoosh colored in red and white tips on the bottom.

“You only got one life to believe in. It’s Saturday night, let’s ride big pimpin’,” he spat into the microphone. 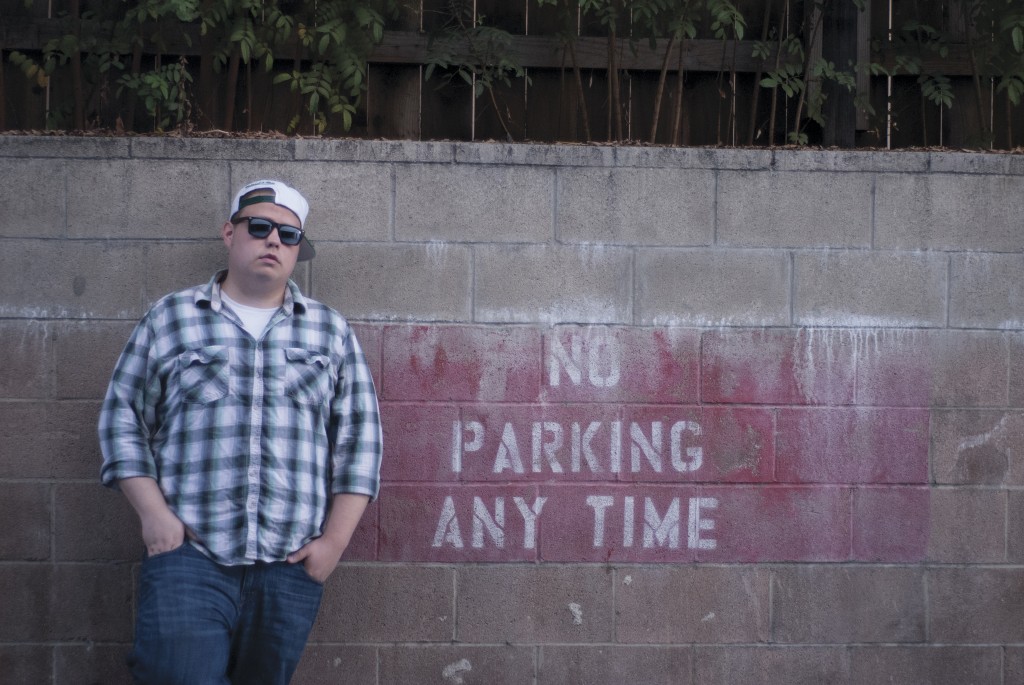 After listening to “Saturday Night” a few times, Lovegren talked about maybe changing up some lyrics.

Patrick “Fetto” Perfetto, a strawberry-blond man wearing a plain white T-shirt and green gym shorts, sat at the recording desk next to the mic.

Standing up at the microphone, Lovegren took off his gray Chicago Bulls snapback cap and popped on his headphones. The music played, and he held up his iPhone to read the lyrics.

“You weren’t talking into the mic correctly,” he said.

Lovegren is a struggling yet determined hip-hop artist known as MC MXC. It was a Friday night at around 8 p.m., and he and Perfetto, his engineer, were at the latter’s home recording studio to finally finish his first full-length mixtape, which they’d been working on for weeks.

Like most artists in L.A., or in any major city, Lovegren is struggling financially while trying to be discovered.

He moved from North Omaha, Nebraska in October 2011—a car full of clothes, a computer, and $400—in pursuit of his dream. With nowhere to go on first arrival, he crashed at his brother Ivan’s apartment. Ivan, who moved to L.A. to pursue acting, was not able to provide a bed for Lovegren, so he had to sleep on the floor until he found a one-bedroom studio.

“I still sleep on the floor,” he said. He shares that apartment with his roommate.

Lovegren recognizes the pressure of being a new artist, but he’s optimistic and positive as well.

He took copies of his first demo around town, even though he said, “it sounded like shit.” He bar-hopped in an attempt to make connections by spending at least 30 minutes in any bar. And he went by the name “Eddie Winston.”

“I go by ‘Eddie Winston’ to the people I work with in this industry,” Lovegren said. “So they don’t know my name is, well, you know.”

With this method, he met Phil Stamper, Paula Abdul’s manager. He gave Stamper a copy of his demo as well as his information. Lovegren has not heard back from him, but it’s not going to hold him back.

“At least I’m in his brain,” Lovegren said.

Being a rapper wasn’t always part of Lovegren’s dream. He had seen a concert where an energetic pastor was hyping up the crowd. Lovegren, who always wanted to be a performer, was impressed.

“They were like rock stars up there,” Lovegren said. “I just knew [that being a pastor] is what I wanted to do.”

Lovegren had come from a devout Christian family, so becoming a youth pastor seemed to be a good decision. Lovegren attended Bible school in Omaha at 18, but not for long.

“I left after a year because their lifestyle was too strict. They wanted me to go a certain way,” Lovegren said. “They just contradicted everything. And I would have made the same pay as I do now.”

Lovegren is currently employed at the Capital Grille where he works as a “lazy server,” he said.

Back in the studio, Perfetto synched and leveled the audio tracks for one of songs for the mix tape. He turned around from his desk. He looked at Lovegren, who was sitting on a beat-up, white leather couch, and at Gabe Bowling, who was standing in front of the mic.

“I don’t mean to sound weird, but we’re all Craigslist friends,” Perfetto said, referring to how they met.

Perfetto, who works as a DJ, was a little uncertain about meeting Lovegren.

“I was like, ‘Alright, another white rapper.’ I’ve worked with a lot of them,” Perfetto said. “But then I heard him and was like, ‘Wow, this kid is good.’ He’s a talented mother fucker.”

The term “white rapper” is something that is probably not going away. It has been popular ever since Eminem popped onto the scene at the turn of the century. But Lovegren has accepted that he’s going to be criticized and compared to Eminem, because he knows that he wouldn’t have this opportunity without him.

“Em opened a window for us rappers, but that mold he created is broken,” Lovegren said.

Lovegren said it’s hard for white rappers in this industry because they’re all thrown onto one list. It’s mainly because they are all trying to sound like Eminem by rapping fast and angry. Lovegren has admitted  to doing this.

“The first song I ever wrote was when I was 19,” Lovegren said, thinking about it. “It’s the worst thing I ever created. I was trying too hard to sound like Em or Asher Roth.”

But Lovegren said that his music has matured since then because he knows what he wants and needs to talk about. He hopes that this will separate him from that pack or title “white rapper.”

Everyone took a little break. Lovegren whipped open the window to let the small home studio/closet breathe. He sat down and lightly banged his head against the wall and sighed. He quietly said to himself, but still clear enough for everyone to hear: “I hate who I am. I wish I got a fuckin’ career.”

There were times, he said, when he didn’t even want to leave his room. He wanted to just lock out the world.

When he found out that a few high school friends signed NFL contracts, he was forced to think about what he has been doing with his own life.

“I could have so easily quit,” Lovegren said. “No one’s holding me back.”

Lovegren said that he has thought about moving back home and getting a “real” job with an insurance company or car dealership instead of struggling in L.A.

Despite all his troubles, Lovegren said he keeps a journal to help him get through the pain. Some of his lyrics are even lifted from the pages.

“An entire rap was off of one journal page,” Lovegren said. “Every rapper has a niche. And mine is storytelling.” 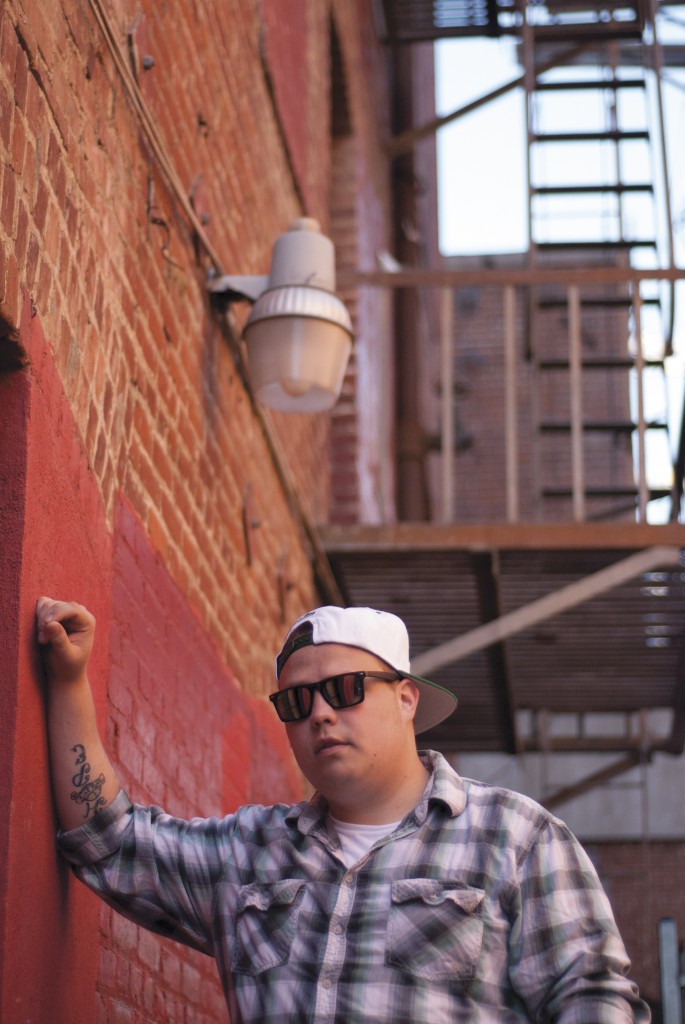 The first hip-hop record Lovegren ever heard was “The What” by Notorious B.I.G. on cassette tape. Lovegren said that this inspired his style, that loose and easy flow of the 90s.

“That’s what I grew up with,” Lovegren said. “I want to bring that back.”

“It’s all about who can spit the fastest lyrics. I get that for some artists, but that’s not me,” Lovegren said. “I want to get back to the heart of hip-hop.”

Around 9:50 p.m., the recording has stopped due to the background noise of an ice cream truck.

The air conditioner has been turned off for almost two hours during the recording sessions. The heat quickly rose, causing everyone’s skin to glisten.

“This is not normal. We usually don’t bust out three or four songs in one night.” Lovegren said. “We had one song that took five hours.”

It’s about 11:30 p.m. and everyone’s energy level has drained. Lovegren struggled to remember the lyrics from a song he recorded a couple years ago.

“No. Why can’t we just punch it?” Lovegren said.

The clock read 11:51 p.m. Lovegren rapped out the last few lines of the song. He stepped away from the mic, exhausted. Perfetto pressed a few buttons on his keyboard.

Lovegren clapped his hands in excitement. The studio door and window were opened wide to allow the fresh air into the muggy, humid closet.

Lovegren hopes that this mixtape will help him push forward in the industry. To do that, he has to go back into the world again, and market himself as an independent artist.

And maybe he’ll walk into a bar at the most perfect moment and get noticed.

“I’m just looking for that one person for the opportunity,” Lovegren said.