Home Features Stringing It All Together
1 of 3

Crimson statement necklaces made from authentic coral reef are layered precisely and delicately fastened onto the neck of a woman that embodies cultural pride.

In Nigerian culture, the color red represents the strength and endurance of people that live there.

Pamela Adewoyin is the CEO and founder of Lola Ade, a jewelry line influenced by her West-African heritage.

The name Lola Ade translates to “wealthy crown” in the native Yoruba language. “Lola” was given to her by her grandmother and “Ade” derives, in part, from her paternal last name.

This namesake reminds Adewoyin to humbly wear her head held high to display her crown.

She was born in the United States, but lived in Nigeria as a child, soaking up the culture that surrounded her.

“Nigerians are very vibrant, colorful people,” Adewoyin said. “We love fashion. We love to get dressed up. And still to this day, my grandmother who is 86 years old will not come out of the room unless she has her powder on. She has her clothes freshly pressed, like matching sets, jewelry, everything still to a T and that’s been ingrained in me to always put my best foot forward.”

Adewoyin began crafting jewelry in 2010. She is self-taught.

“Honestly, there was a lot of trial and error, broken necklaces, cut fingers, but it was just something that became therapeutic to me,” She said.

Although designing jewelry was something that was important to her, it was not a part of her life that she shared openly.

“I always felt like I did all my creative stuff in secret,” Adewoyin said. “I still to this day find difficulty almost being proud of the things that I’ve made creatively, because not to say that it was looked down upon, but it wasn’t necessarily propelled as much as you need to get straight As. Excellence has always been the measure, and it’s a lot easier to measure that in standard degrees versus creative degrees.”

Adewoyin said when she first started experimenting with jewelry, she would lie to people where she got her jewelry. Often she would claim that she bought them from various retailers.

While her business was in the works, she spent years feeling like she wasn’t ready.

It took an unexpected message in church to make her do some soul searching.

She was sitting in a pew as the pastor was talking about how everyone is given a gift. Some people are blessed enough to be able to figure out what that gift is during their lifetime and others are even more blessed to be able to take that gift and use it for the benefit of others.

Adewoyin believed the pastor was talking directly to her.

“And it really struck me, because if you go to church, you go for the word, but then, every once in a while, you’re like is he talking to me?” Adewoyin said. “And it stuck with me so much that I started feeling this guilt. Like you have this talent that God’s given you, you’re self-taught.”

After mass, she was inspired to take action so much so that she had trouble sleeping.

“It just kept getting worse and worse and all I kept thinking to myself is that you have a window of time to act on your gift. And I started feeling the fear of not putting it out there like am I going to feel some type of way 10 years from now, whatever my life looks like regretting not having done it?” Adewoyin said.

Although Adewoyin had her website formed for a prolonged period of time, she never quite felt ready to take the leap and press publish. She ultimately had her friend and coworker at the time press the button for her.

Adewoyin reflected on the nervous energy she had leading up to that moment.

“My palms were sweaty. I think when you realize you have something good, it’s almost like you self-sabotage yourself,” Adewoyin said. “I think I created all these scenarios in my head where I didn’t want to be seen as anything other than the smart girl that all these people knew me to be. And that’s such an unfair, ridiculous concept. I was creating these own images of what I thought I was to other people, but my family was really supportive.”

She said she cried after it was finally done.

“I felt like it was this deep dark secret. It’s so crazy how vulnerable you feel when you put yourself out there. My anxiety was on 1,000,” Adewoyin said. “In hindsight I’m so glad that happened, because so many blessings have come my way since I did, and you really have to take a leap of faith. You’re never going to feel ready, but even now it feels brand new. I still get goosebumps. I felt the biggest weight off of me.”

Adewoyin said everyone acts on their own time table.

“I’m not gonna say there will come a time in your life, but there may come a point in your life when you will feel something and no one has to tell you that it’s time and you have to act on it,” Adewoyin said. “You just have to put it out there and trust God or whatever higher power you believe in that it’s going to work out no matter what it is. But we fear 99 percent of things that never even happen to us, and I had to check myself to stop doing that.”

One regret she had that lingered after publishing her website was not having a strong support system.

“In the beginning when I launched, I wasn’t open and honest with people about the things that I was going through, the amount of self-doubt, the amount of stress, just confusion of where this is going,” Adewoyin said. “I had kept everything in to myself and it’s not healthy.”

Adewoyin’s sister Temitayo Adewoyin said that their family was supportive of her passion.

“Our family was just really excited for the opportunity for her to make stuff with her hands and to have the public like her pieces,” Temitayo said. “There’s got to be something very satisfying for her that her art is appreciated.”

Adewoyin said her biggest success is getting opportunities that she didn’t seek out. Despite being a one-woman business with no publicist, she is always surprised when people take interest in her business.

Lola Ade has been featured in Teen Vogue and CNN Africa. Adewoyin was even invited by Facebook to set up a pop-up shop in their headquarters, where employees could shop her products.

“I think manifestation is really important. You have to believe, write down, like the Bible itself says ‘Write the vision, make it plain.’ And I think that verse is so important because we may want things, but then not necessarily know how it will come into fruition,” Adewoyin said.

Although Adewoyin wears her cultural pride on her sleeve today, she wasn’t always proud of her cultural identity. After spending some of her childhood in Lagos, Nigeria, her family returned to the U.S. and moved into a quaint suburb in Philadelphia.

Adewoyin said her house was on the outskirt of a predominantly caucasian community.

She went through a cultural identity crisis when she first came back to the U.S. She recalled most of her neighbors being blonde-haired and blue-eyed girls.

“I didn’t see anyone that looked like me outside of my family,” Adewoyin said. “I tried to change my accent and I did. I ended up losing my accent. I was trying to put hairspray in my hair to get to the same pop as these other girls, but I want to encourage you to be, wherever you’re from, be proud of that whatever your background is.”

Some negative experiences from Adewoyin’s past shaped her perspective from a young age. Discrimination and hate crimes toward her family was not an uncommon occurrence.

She even recalls people placing burning crosses on her family’s lawn.

“We woke up one day to the sound of glass shattering and they had thrown bricks through our windows. They physically spray painted KKK on our house,” Adewoyin said. “I remember painting over that with my mom and not really realizing what that meant and why people were picking on us.”

Adewoyin acknowledged that racism has yet to subside, however her resilience in the face of adversity is something that is fostered through creating a sense of community within one self and with others.

She said that finding a community that she could relate to helped add to her formed perception.

“I’m so happy now to be able to realize how rich my culture is,” Adewoyin said. “It’s a shame that they hate me. I pity them for the beliefs that they have, because there is so much beauty that happens in different cultures, and I wish I could tell my younger self when trying to assimilate back into the United States that ‘Your accent is beautiful. Your Skin is beautiful. Your hair does not look like these other girls and that’s okay.’”

Adewoyin believes there is beauty in being authentically yourself and growing up feeling comfortable in your own skin.

“In Nigeria, when kids go to school, they don’t wear extensions. They can’t wear any of this stuff. They can’t even wear makeup a lot of the times and in some ways I think that is beautiful,  because you grow up to be your natural self,” Adewoyin said.

“It’s identity and we symbolize it by what we do, how we dress and the way we look – all the nonverbal communication we do – all that is symbolic – because we do carry who we are visually,” Davoodian said. “Those symbolic aspects help us identify who we are.”

“I hope that at this day and age that people are learning to embrace their differences and in those differences can come talents and beauty that you would never imagined. That’s what I really hope to see,” Adewoyin said. 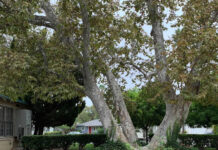