Story and Photos by: Genna Gold

Every morning she lines her lips bright ruby red, pins her  corkscrew fiery wig, and puts on a vintage blue and white polka-dot cotton dress that blows in the breeze. Perfect white pearls adorn her ears and neck while antique black-rimmed sunglasses cover her ever-wandering eyes. A brilliant red spotted parasol dances on her shoulder. A nearly empty bottle of “Vitameatavegamin” is strategically placed in her white lace apron pocket.

With the sun blazing down and not much shade in sight, she did her best to entertain a park full of fans who have come from around the world to experience all that Universal Studios Hollywood has to offer.

“I love my fans. Aren’t they just fabulous?” Vincent said as she fervently made her way through the crowded park pathways. 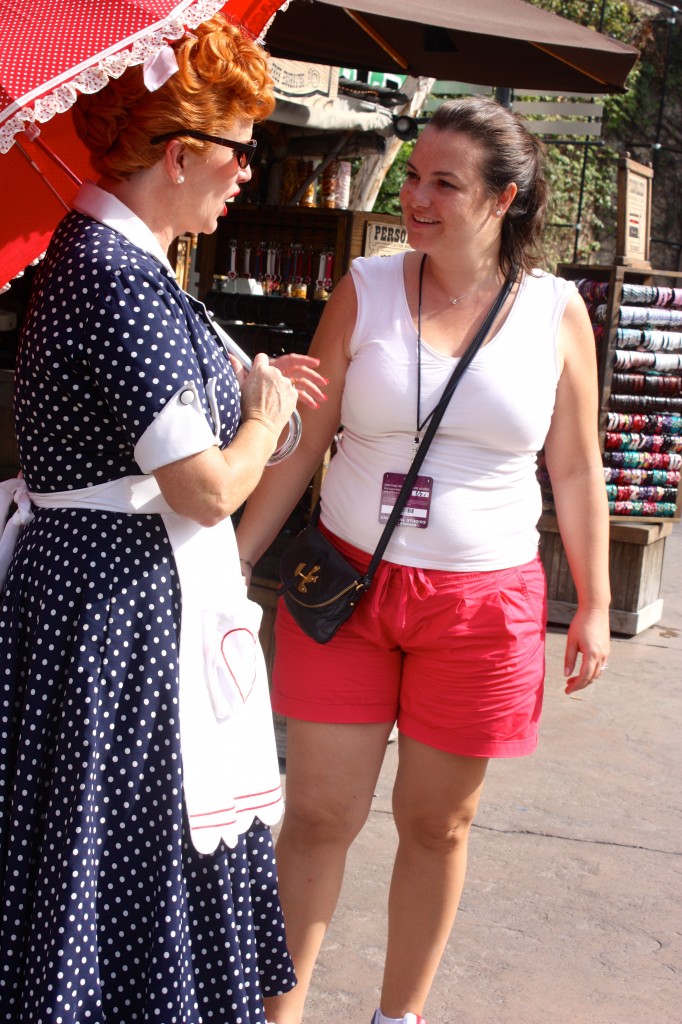 As she strolled, she never missed an opportunity to show her undying appreciation to her adoring fans by posing for pictures and providing witty comebacks to even the most challenging questions.

When asked by a child, “Aren’t you dead?”

Since 1951, “I Love Lucy” has consistently been entertaining the masses with its universally understood comedy and lovable cast. Fans have relished actress Lucille Ball’s effortless sparkle and wit in more than 81 countries. And Vincent has made her dream come true by taking her love for everything Lucy and building a respectable career.

“I am one of only three actresses that have ever been approved to perform at the Hollywood location,” Vincent said. “I am extremely proud that I have been able to make a solid living being a live performer, especially since there aren’t as many jobs available as there were when I was first starting in the business.”

Being a performer hasn’t always been Vincent’s priority. 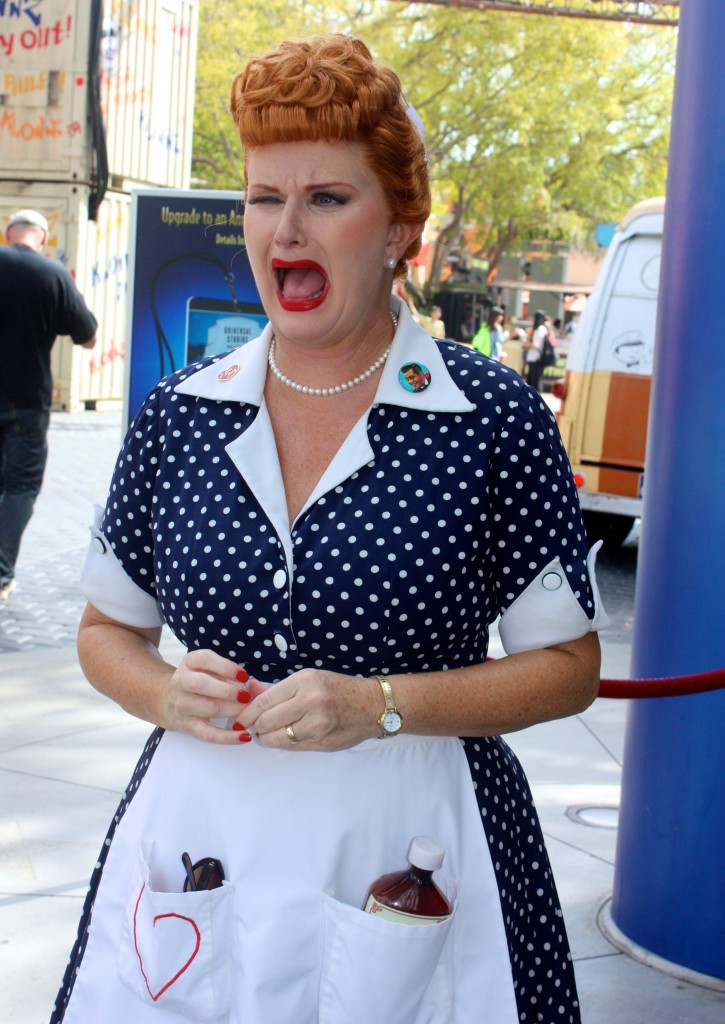 Although she moved to Los Angeles from Indiana when she was 7 years old, it wasn’t until she was 16 that she started taking dance lessons at a small studio in Santa Monica named Danny Daniels Dance Studio. She didn’t seriously start considering live performance as a career until college.

“I always knew she was going to end up an entertainer of some sort. She’s a natural performer,” said Valerie Bakst, her sister. “She’s always been effortlessly funny and quick.”

As her dress swayed back and forth to the background music and noises of the surrounding attractions, Vincent began to embody her character. She tactically moved through the traffic greeting her fans with the utmost grace and charm.

“I can’t have an affair with you,” Vincent said as she yelled to a fellow performer hanging out of a second story window.

After college, Vincent’s dream was to be on Broadway. She knew that if she moved to New York, it would give her a better chance of making it to the stage. She was torn between her desire to act and her maternal instinct to be there for family.

Instead of New York Vincent began working at a children’s daycare center in L.A. It was there, when she stumbled across an ad from Universal looking for a Lucy impersonator.

“I had never even thought of doing this type of acting before, but I thought I’d give it a try,” she said.

Vincent happened to be a huge fan of the show and she knew the character inside and out. Although she doesn’t resemble Mrs. Ricardo out of costume, her unintentional Lucy-esque facial expressions mirror the iconic TV character.

“I remember we would plop ourselves down in front of the TV every week to watch her show,” Bakst said. “We could practically recite every line.”

Vincent showed up to the audition in a red wig, vintage white dress and red lips. She did her best Lucy impression.

“They told me to go on with my life and they’d call me if they liked me,” she said.

After a few weeks she got a callback. The second audition was similar to the first except that she was given a costume, and her performance was videotaped.

“I really enjoy writing my own stuff so I decided to write up a short skit,” she said.

Lucille Ball’s daughter, Lucy Arnaz, and CBS own the rights to the character, so the audition tape was sent to both for approval. The waiting only got worse.

“The whole process took a total of nine months,” she said. “Ms. Arnaz and the network are very particular about who represents Lucille’s legacy.”

Although the process was tedious and drawn-out, Vincent couldn’t be more pleased with her career and the opportunities that have come with it. She has been at Universal for the past 17 years and completely adores what she does.

“Being able to physically interact with my audience and see how happy it makes them makes it all worth it,” she said. 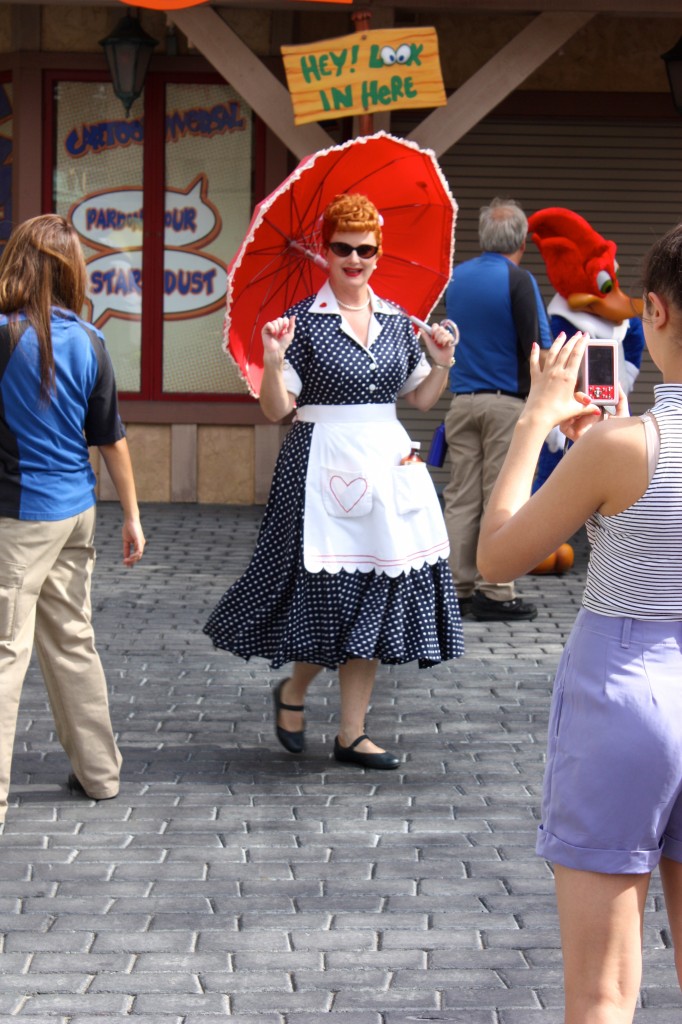 On top of her steady Lucy performances, she makes special appearances in character at private events around the country and she performs on a regular basis with comedy musical theater groups.

“Not having a script keeps me on my toes and allows me to keep my comedic top hat on,” she paused, slightly chuckling. “Getting into the park for free doesn’t suck either.”

Both of her parents were a positive influence in the entertainment industry and helped push her to continue in her family’s footsteps.

Her father, Larry Vincent, was a familiar face in Southern California in the 1970s. He was a TV host for a show called “Fright Night,” which aired on KHJ-TV and “Seymour’s Monster Rally,” on KTLA, which aired low-budget horror and science fiction movies. He also dabbled as a character actor. Her mother, Betty Vincent, is a successful pianist.

“I wanted to carry the metaphorical family torch so badly that I actually kept my father’s last name when I got married,” she said.

Her success as Lucy brought her opportunities that expand far beyond the park.

Being able to represent one of the entertainment industries’ most beloved characters can be an interesting experience.

“She is such a recognizable character. Sometimes it makes me feel like a rock star,” she said. “She’s beloved all over the world. Even today, I had a fan all the way from Saudi Arabia come up and speak with me.”

Vincent takes her job seriously, down to every word and movement. She treats each performance with its individual deserved respect.

“I feel Lucille Ball would be pleased with my portrayal of her character. I try to not overact and make the character seem gaudy or fake,” Vincent said. “I try to be as respectful as possible.”

Her uncanny resemblance to the star helps her get more in character and keep her act genuine.

“Even before I started working here, I remember seeing Diane and thinking how great of a job she does. Lucille would be proud,” said Ashley Stern, a fellow Universal employee.

“I have received many accolades for my performances over the years, so I hope she would be as happy with me as my audience is,” Vincent said.

Being able to personify a timeless American icon will never get old for Vincent, but that doesn’t mean that it’s the last stop on her career path.

She’s now performing in a musical she wrote and directed. The show took 12 years to put together, and she will premiere to next year in North Hollywood.

“The show is called ‘Nuthin’ But Hutton,’ and it’s based on one of my favorite actresses, who was Universal Studios’ biggest star in the 1940s, Betty Hutton,” Vincent said.

Vincent said that if she had started taking her acting career more seriously at a younger age she might have made it to Broadway. Still, she is confident that she will one day make her dream a reality one way or another.

“I absolutely love what I do,” she said. “I feel privileged and honored being able to portray such an American icon.” 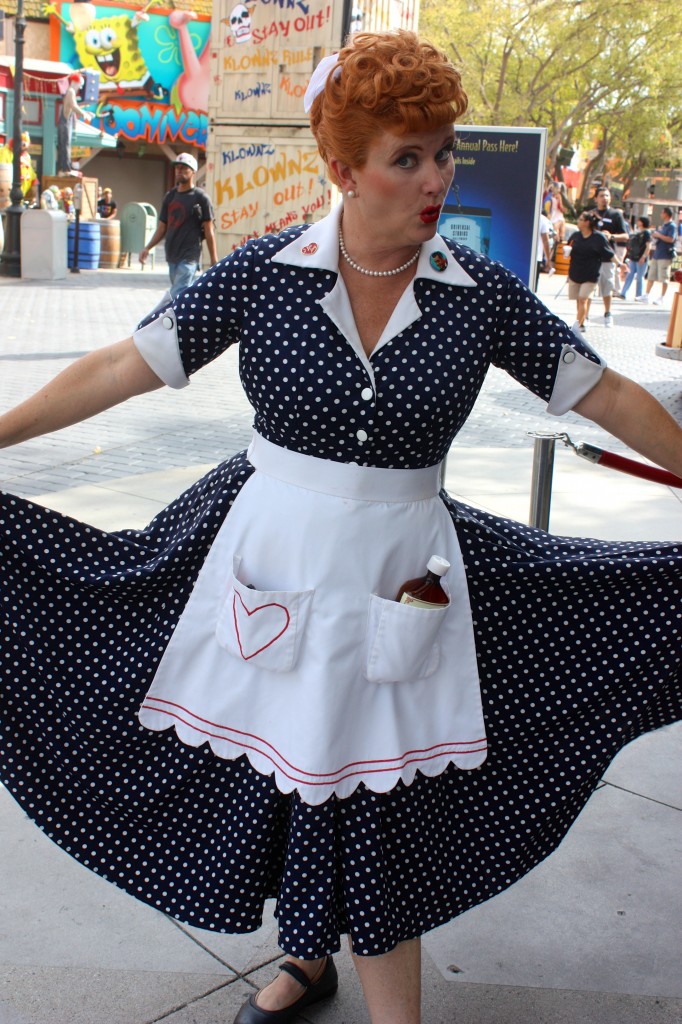 For The Love Of The Horse