When most people think of Southeast Asian cuisine, they usually picture noodles or egg rolls. But Saigon Sandwiches in Canoga Park serves bánh mì, a Vietnamese sandwich that combines European and Asian ingredients.

There’s nothing eye-catching about the exterior of the restaurant. The place is part of a block of shops that all look similar from the outside. Whereas the exterior is plain and boring, the interior has a life of its own though.

Saigon Sandwiches is a tiny place, probably no bigger than an average sized living room. There were only five tables inside and most of them were two-seaters. The small space means that there isn’t much room for decorations or pictures. The walls have photos of the food and two red lanterns hang above a small plant of bamboo.

In the middle of the small restaurant was a table with five men who were sitting and playing cờ cá ngựa, a Vietnamese board game. They laugh and speak to each other in Vietnamese as they roll the dice and move their pieces across the board.

Over in the corner, a man sits playing online poker on a machine. After he finishes playing, he lights a cigarette and then walks over to watch the cờ cá ngựa game. His exhaled smoke lingers above the players.

Near the register there are scratchers and loto tickets for sale. I begin to wonder if this is really a restaurant or some kind of mini casino.

When I first entered, one of the men watching the cờ cá ngựa game gets up and greets me. He asks me what I want as I look overhead to the menu hanging behind them. I order three sandwiches, one B.B.Q. pork and two marinated chicken. He nods his head, walks forward about fifteen feet, yells through a window into the kitchen, and then tells me my order will be ready soon.

I sit down at one of the tables and wait for my order. There is only one other customer there, and he quickly recieves his food and then walks out. I get the impression that people don’t usually eat here, they just order take-out.

While I wait, I’m not sure if I should focus on the TV with the football game or the group of enthusiastic men playing their board game.

The game is getting interesting when my three of my sandwiches arrive about ten minutes later.

The B.B.Q. cha sui pork sandwich is a footlong that contains shredded carrots and cabbage, mayonnaise, jalapenos, caramelized onions, cucumbers, and of course, delicious slices of tender, marinated pork. There is a good ratio of meat to vegetables, with both groups complementing each other rather than overpowering. Although the jalapenos are cut in giant slices, I ended up taking them out because it was just too spicy for me (but spice fans should appreciate it).

The marinated chicken sandwich is also a footlong that has shredded carrots and cabbage, mayonnaise, jalapenos, caramelized onions, and cucumbers. The vegetables are crunchy and evenly distributed. The cabbage and mayonnaise are mixed together and create a sort of coleslaw on the sandwich. Fortunately, the chef doesn’t use too little or too much mayonnaise, but just the right amount.  And the chicken was soft and tender, with a fair amount of spices.

Both sandwiches were delicious, though I lean more towards the marinated chicken because I think the seasoning was better.

While the food was tasty, my sister did find a piece of bone in her marinated chicken sandwich. Although it was a tiny piece, it was still an inconvenience and should not have been there.

Overall, the sandwiches here are delicious and tasty. They’re also all under $6, which is a price that can’t be beat.

Something that I really like about the place is that it does feel very authentic. The tight spaces, the quick service, the group of gentlemen sitting together playing a board game. This isn’t a typical American restaurant. It reminds me a lot of the kinds of places I ate at while traveling in Southeast Asia a few years ago.

Dining inside might be a hassle though given the lack of seating, and customers should be aware that the place is a smoking area. But the restaurant’s quick service means that take-out is always an option.

Honestly, forget subway. This place is cheaper and a lot better.

Saigon Sandwiches is located at 7219 De Soto Ave. in Canoga Park, California. The restaurant is open Monday through Thursday from 9 a.m. to 9 p.m. 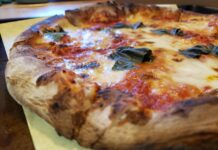 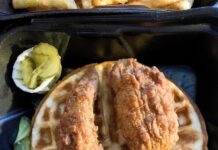 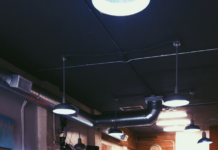