Upon entering Let’s Pho, walking up the ramp towards the seating area, patrons aren’t immediately drawn in by the scent of the food. Instead, customers are invited in by the ambiance and design of the restaurant.

While the restaurant is decorated with a fusion of Vietnamese and vintage decor, one arrives to a scene filled with small groups of people spread out throughout the restaurant. Although everyone is sharing a common space, each table feels as if people and their parties are in a world of their own.

Let’s Pho is nestled between a liquor and the bustling street of Woodman Avenue. From the outside, the restaurant appears underwhelming. However, when one comes into the restaurant they are met with brilliant 1970s aesthetic decor. Everything from a vintage movie poster hung next to the liquor mart door, a rotary phone that sits on a cabinet covered in Chinese characters and a vintage Coca Cola clock.

There was a lot to of little details to note within Let’s Pho. While all the furniture marries well together to create one interesting place, if one looks closely they will note the uniqueness of each piece and how it adds to the restaurant’s layout.

Instead of using standard cabinets and shelves to store extra condiments and utensils, Let’s Pho uses stacked wooden crates to help convey a rustic vibe. The lighting fixtures also helped with the rustic aesthetic. The fixtures were knotted ropes that dangled from the ceiling with a light bulb attached at the end and no two were the same.

The restaurant had a paneled Victorian style bronze ceiling. It’s posh and elegance doesn’t seem like it would fit with the restaurant’s theme, but it surprisingly works well and adds to the uniqueness of the restaurant.

While the ambiance and design is a refreshing find in the valley, the food was subpar. Although restaurants often have a signature taste to their foods, in the case of Let’s Pho, soup tastes like soup.

The dish I sampled on my visit was the chicken pho. The soup was served in a tin bowl with the traditional toppings of lime, bean sprouts, jalapeños and the not so traditional fried cracker garnish. Overall, there was nothing exciting and new about the flavors offered in the chicken pho at this location.

When serving a classic dish such as pho, it sometimes feel like there can be no deviation from the standard recipe. Let’s Pho strengthens this fact as their dish was ordinary and plain. If the restaurant’s cooking matched its bold interior, the dish could have been made more memorable.

However, despite the ordinariness of the pho, the restaurant itself seems to be the biggest draw about Let’s Pho.

Evident by the groups of people who were in the restaurant, this is a local place that friends go to catch up, couples go on dates and

The space created by Let’s Pho is an atmosphere of causal and social interaction. The food is supplementary to the restaurant’s overall vibe. 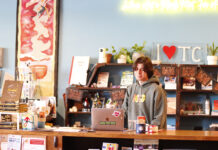