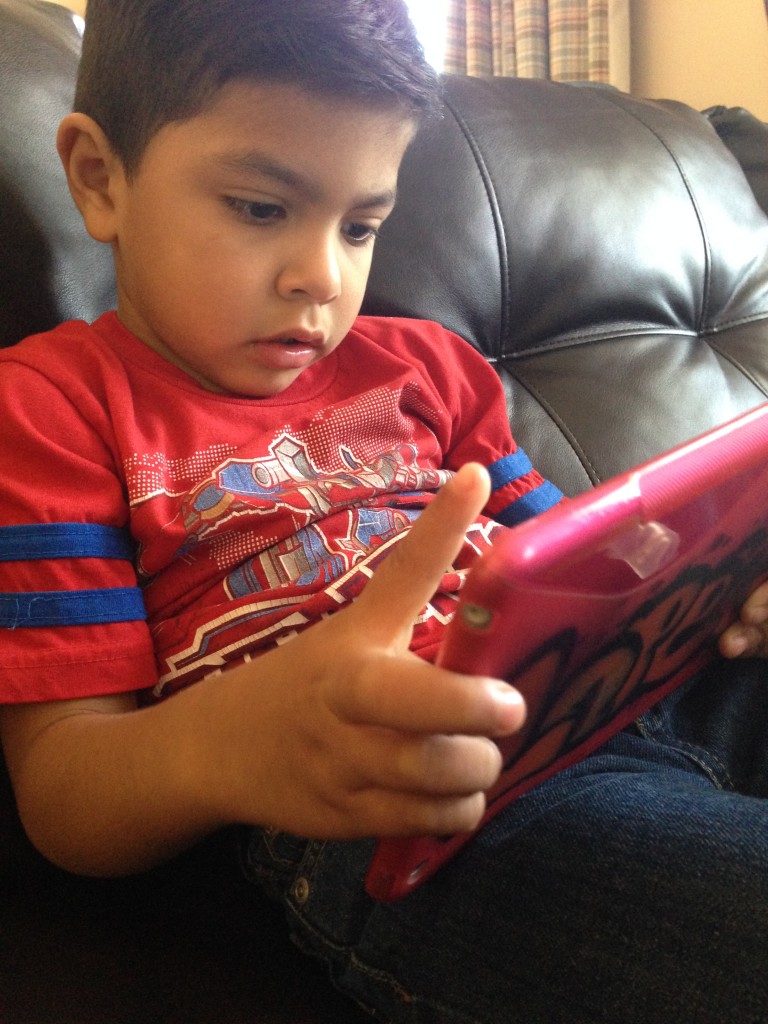 The catchy cartoon jingle of “Little Einsteins” is drowned out by the even louder sound of an iPad. Inches away from the SmartGlass screen, fixated on the device held to his face, a toddler perches on his elbows and ignores the world around him while his mother picks up after him.

Gabriela Lopez, the boy’s mother, walks around him and picks up a purple-and-blue blanket he had been playing with earlier and asks him if he is hungry.  But, Lopez’s son, Andy, ignores her question as he walks away from her.

“Believe it or not this really helps me with him,” said Lopez, pointing at the iPad and signaling to Andy with pursed lips. “He’s a brat. He cries until I give him what he wants.”

Lopez is the mother of three children, 9-year-old Kathy, 5-year-old Digo and Andy.

Raising three children so close in age isn’t easy for Lopez. She is a full-time mom and a part-time student. Lopez said it’s tough to run a home, go to school and tend to her children.

“My children are a handful,” she said. “[Especially] the boys but mainly Andy.”

To get an edge, Lopez is going high tech.

Kana Brubaker, a pre-school teacher, said children from the ages of two to five are easily entertained by bright colors and sounds.

“Children tend to keep calm when they can physically hold something and touch and play with it,” Brubaker said.

Having a portable tool when dealing with a handful of children could be useful to a busy parent, but it’s not without its downsides.

For example, grocery shopping is not an easy task.

Lopez admits she allows Andy to use the iPad for long periods of time because it keeps him at ease.

After dropping Kathy and Digo off at their school and doing her daily chores, Lopez sits down to do homework. She sets out a juice box, a bowl of grapes and hands Andy the iPad.  Lopez carries the iPad and the iPad charger in her purse everywhere she goes.

In study done by a children’s psychologist Dr. Jordy Kaufman on whether the iPad helps or delays children’s brain development, findings showed that creative and calming activities on the iPad, like painting, are similar to the “real world.” It was revealed that these activities “do not seem to adversely affect children’s behavior or attention in the short term.”

Andy wants attention and runs to Lopez and begs by nudging and biting her leg. With Andy sitting on her waist and putting a handful of her shoulder-length brown hair in his mouth, he asks, “Where the iPad?”

Lopez is embarrassed to admit how much the iPad influences Andy’s behavior.

She isn’t a pushover, but with Andy’s high spirited and tireless attitude it’s sometimes easier to calm him down with the iPad rather than make a scene in public when he doesn’t get his way.

Afraid that she may be judged by others or be seen as neglecting Andy, she says, “I’m not a bad mom.”

Lopez said that she disciplines her children with timeouts or with no TV when necessary. The iPad helps distract Andy from wanting things at the store and from fighting with his siblings.

All in all, Lopez is grateful to have technology to help.

“I can get things done easier if he has the iPad to play with,” Lopez said.

At the end of the long day, Andy, along with the iPad’s battery, are drained and exhausted to their limits. The iPad shows the drained battery on its black screen and Andy’s eyes are droopy and glossy with exhaustion.

“I finally get to do homework,” Lopez said. “And put them both to charge.”