Tom Mason has spent most of his life on his back, and he has made a living doing it.

Mason is the Guinness World Records holder as the fastest street luger in the world.

Lying on metal supported by wheels—and no brakes—Mason set his record of 81.28 mph on a downhill road in Lone Pine, California, one inch off the ground.

“It’s kind of a hybrid of the long board skateboard, but you lay down on your back, and that way you create the least resistance of air, and it’s the fastest way to go on anything, on urethane wheels, with excess speeds over 80 miles an hour,” Mason said, describing street luge.

Street luge began in the 1970s at Signal Hill in Long Beach during a speed run for long board, skateboards, and for stand up speed boards.

One day, a racer showed up with a small handle on the front, and he lay down, holding himself in the prone position and no one could touch him.

“And then the next race, everybody went to lay down and that’s when they coined the name ‘street luge,’ because they said they were watching ice luge and they realized how fast they went and how aerodynamic they were,” Mason said

Mason started street luging on Mulholland Drive, usually between midnight and 4 a.m., a period when there was no traffic.

If they could not find a street with lights, someone would drive close behind the rider.

“As funny as it sounds, I learned to luge at night,” Mason said. “My first day race, I lined up on the starting line, and I looked at someone and said, ‘You realize that I never luged during the day and I’m scared to death because I can see telephone poles, barbed wire fences and cliffs.’ At night we had all the same stuff but all I could see was the yellow line.”

Mason took the bronze medal in the 1996 X Games, but he was stripped of his medal—and nicknamed “The Bad Boy of Street Luge” by ESPN—because he was found to have caused an accident during the race.

Shortly after, Red Bull energy drink began to sponsor Mason as the International Red Bull athlete, and a demanding media responsibility was added to his life.

He began putting on races all around the world, including in South Africa, Brazil and San Francisco.

“We did it at the foot of the Christ in Brazil. That was insane,” Mason said. “Twenty-two hairpin turns, starting at the toes of Kristof.”

Between races, he was endorsing the sport with actors and entertainers for kids. He got Shaquille O’Neal on a luge board made for Shaq’s hulking frame for Universal Studio’s Shaqtacular.

Also, Mason visited various locations of Ronald McDonald House and even had an appearance in the Hollywood Christmas parade.

In 2004, street luge was removed from the X Games.

“A lot of people say I killed the sport, because we put the stakes too high, too quick,” he said. “I decided maybe I had pushed the limits so hard racing almost every weekend for eight years—knock on wood—and I’m still in perfect shape.”

So, Mason bowed out of the sport, and he said he doesn’t miss it.

“I have a lot of great projects going right now that involve street luging. I have no interest in racing at all,” said Mason

Mason now works in the movie and stunt businesses, and has maintained his own contracting business.

“I was just recently the guy on the GEICO pig commercial as a street luge guy,” he said. “I have a show premiering on the Travel Channel. I am the stunt coordinator for a really cool guy named Kevin Connolly. He was born without legs, and he wants to do extreme sports.”

Mason also works as stunt coordinator with Team Hot Wheels, a process by which Hot Wheels fuses real-life cars with the imagination of play in 1:64 scale.

PCW is where 15 life-size Hot Wheel cars were made. Two were showcased at the Los Angeles X Games. A ramp was designed after the orange Mattel toy ramp, only this version was 66 feet long. Two drivers take the life size vehicles around the double loop experiencing 7Gs, defying gravity. The stunt went off as planned.

That morning, Moser was under the hood of a vehicle. When it was turned on, it backfired from under the hood and flames went into his face. Burnt hair and eyebrows are minor examples of what can happen when working in the extreme sports business.

Despite the fact Mason is world-class athlete and pioneer of street luge, he is also a professional racecar driver, motorcyclist, professional wind surfer and owner of a successful construction company. He also has found time for a wife and two children. 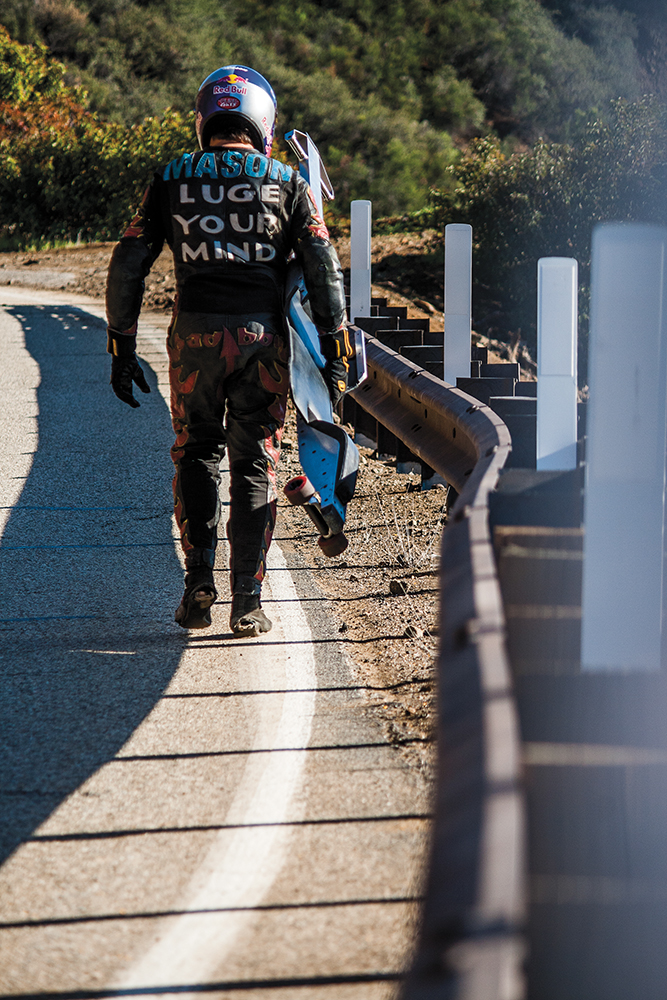 Lost in the virtual world