A revolution begins with one solid step right in the direction of opposition. This bold step becomes a path beaten by individuals who unite against injustice and for the possibility of a better tomorrow. It just goes to show that when enough people get together to fight for change, their hopes get put into action.

Activism has always been an essential part of my life. I can’t remember a time where I wasn’t speaking my mind and trying to get people to open theirs.

With the theme of revolution, I’d like to expand the minds of others to notice not only the ever-changing world in which we live, but also the small revolutions that surround us each and every day.

In the story of Jeremiah Johnson, you’ll meet a survivor of drug abuse and homelessness who has become the head of church relations for Union Rescue Mission on Skid Row; The very mission that saved him.

In Libya, people have incited an uprising to get rid of oppressive government officials, putting their lives on the line with each protest they attend. Once a year, AnswerLA.org has a thunderous rally and march down the streets ofHollywood, united in anti-war sentiments and the yearning to bring our troops home.

To promote a safe environment for youth and adults alike, an all ages venue called The Breathing Room is bringing live music in a drug and alcohol free environment. A green and healthy alternative to your average burger joint, O!Burger inWest Hollywood, is not only completely organic, but only uses supplies and décor made out of recycled products.

At 87, Dan Garland is the adoptive father of numerous abandoned dogs, supporting himself, his family and his canine troop solely with Social Security benefits.

Transcending the gender binary, a genderqueer individual named Chris exposes the rigidity of society’s gender norms, all the while bringing awareness to all who abide by them.

The beaten paths of revolutions before have led us to seek out new grounds on which to carve our own.

Throughout this issue, you will read stories of individuals who cross boundaries to better themselves and the lives around them. Breaking decisively from the average school magazine, The Bull has collaborated with KPCRadio.com to provide a CD with on-air interviews and dictations from print, as well as songs from independent artists.

This magazine is meant to make you take another look at your world and reassess what you believe is worth fighting for. After all, change can only come when your conviction takes the reins. 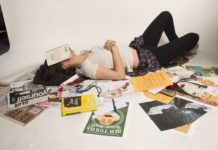 Letter from the Editor – Entertainment

Letter from the Editor- Los Angeles

Letter from the editor- Alone Together