Home Features Entertainment industry not all glitz and glamour 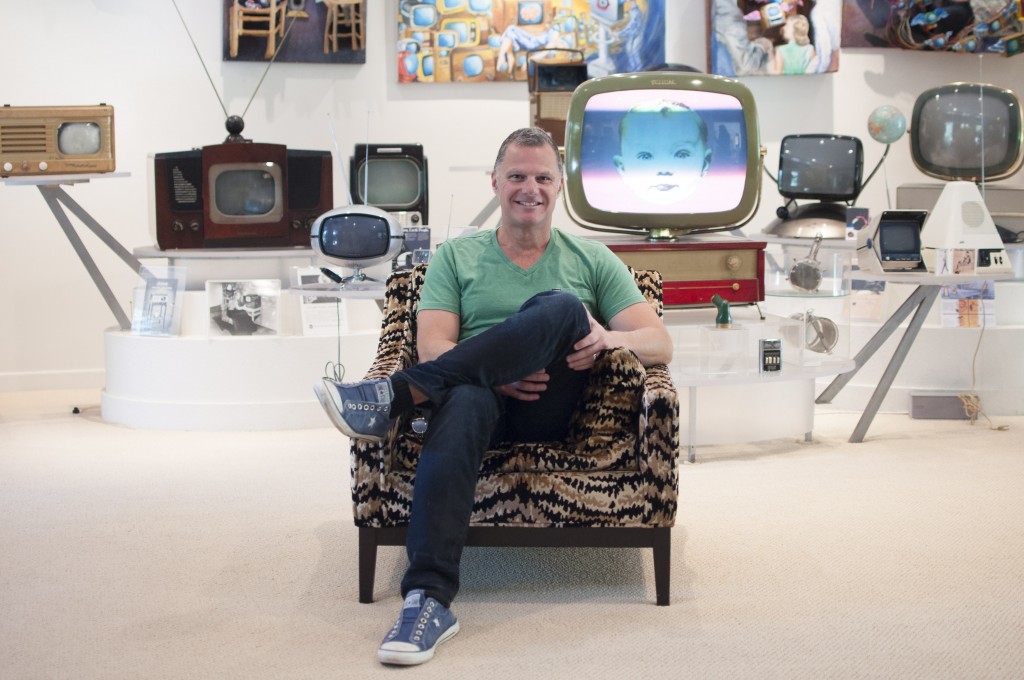 The entertainment business looks glamorous from far away, and walking into a room filled with vintage televisions and TV memorabilia, that seems to be the case.

Tucked in the city of Los Angeles, a retired television director and editor works with his brother on their latest project. Surrounded by artifacts not only from their own careers, but even Jackie Kennedy’s Emmy, there’s a sense of Hollywood royalty.

Scanning the visual overload of antiques, an unusual piece stands out. It is the first electronic television transmitter. Invented by Philo Farnsworth, it was famously stolen by RCA, which sent a Russian spy to befriend him.

The beginning of the modern entertainment business of television started with an unjust act.

This piece is so significant to director Phil Savenick and his brother, Jeff, that they are attempting to have it placed in the Museum of Television and Radio.

Jeff, a veteran TV editor, started as a homeless Pierce College student after his father died.

During his struggle to succeed as a student he kept asking himself, “How am I going to find something I love to do that is going to help me thrive financially?”

He does not recall how long he asked this question, but when the answer came to him he was in front of his brother’s editing bay.

Experimenting with the editing equipment intrigued him, but Jeff admitted that when he told his brother about his interest in the business, Phil’s response was not positive. Jeff lacked the experience to be successful in the industry.

Looking for and getting the next project was not easy for Jeff, despite landing gigs with popular shows, including “Kourtney and Khloe Take Miami.”

“After I wrapped this show, I was out of work for about eight or nine months,” Jeff said. “At this point, I had just had my son and was married, so the pressure was on to find another job. It was at the height of the stock market-real estate crash, and the entertainment business was hit hard.”

Jeff sat in front of his brother’s collection of vintage TVs as a project that he edited—Billy Joel’s 1989 performance at the Grammy Awards—played on one of the televisions.

Learning to be of service to a company gave Jeff the right frame of mind to eventually get his first directing job on “The Simple Life.”

According to the Bureau of Labor Statistics, for Film and Video Editors, there is only a 3 percent expected growth in the field in the next decade, not giving much room for the established individuals and even less for the newcomers to the entertainment business.

But Jeff is at peace and in the zone of the creative process.

“Life is about intrinsic and extrinsic forces,” he said.

The editing bay screens show an image of Howard Hughes and the aftermath of him crashing his plane into a building in Beverly Hills. Jeff is working on his latest project, “100 Years of Beverly Hills.”

Phil, a TV director and editor for more than 35 years, added, “Mary Pickford was the biggest movie star of her generation, but not many people these days even know her name. Douglas Fairbanks, Pickford’s husband, was the founder of the Beverly Hills we know today.”

It’s a hard fact that many people in the entertainment business have to come to terms with being on top at one point, while not even being remembered by the next generation.

A former actor from Boston, she found her way into therapy while she pondered the question of how the family dynamic works and how we relate to the situations around us.

“For actors to be their authentic self is the best gift to their craft and themselves,” Gnatovich said.

While there are some actors who do not have a backup plan, and therefore struggle to make it their entire lives, others, like Pierce College student Vani Lamba are practicing practicality.

“I know that I will always be able to get a job as a  nurse,” Lamba said.

Edward Salas, a professor’s assistant in the Theater Department at Pierce, also reflects on the fact that many aspiring acting students try out every season for the semesters production, but few get the roles.

Porscha Stephens, a 21-year-old technical theater student, was one of the many who didn’t make the cut this time for the production of  “Incorruptible.”

“At least I get to audition. When I was in elementary school, because I was shy, they always just gave me the non-speaking roles,” Stephens said.

According to the Huffington Post article “Unemployment is a Lifestyle for Actors, and Now Too Many Others,” 90 percent of actors are unemployed. The number of new acting jobs is only expected to increase by 4 percent in the next decade, according to the Bureau of Labor Statistics, leaving slim pickings for the experienced actors and the newcomers as well.

Stephens’ dream is “to win the lottery, so I can continue to study for the rest of my life.” Until that unlikely day, she “wants to do everything—commercials, television, movies—and from there hope it just takes off.”

For Jeff, much of his answers that led to success came from always asking others in the business, “How can I be of service?” He considers himself a facilitator of his boss’ creative ideas.

By going with the flow instead of resisting it, the onetime homeless student turned TV editor found his true passion, and success followed.