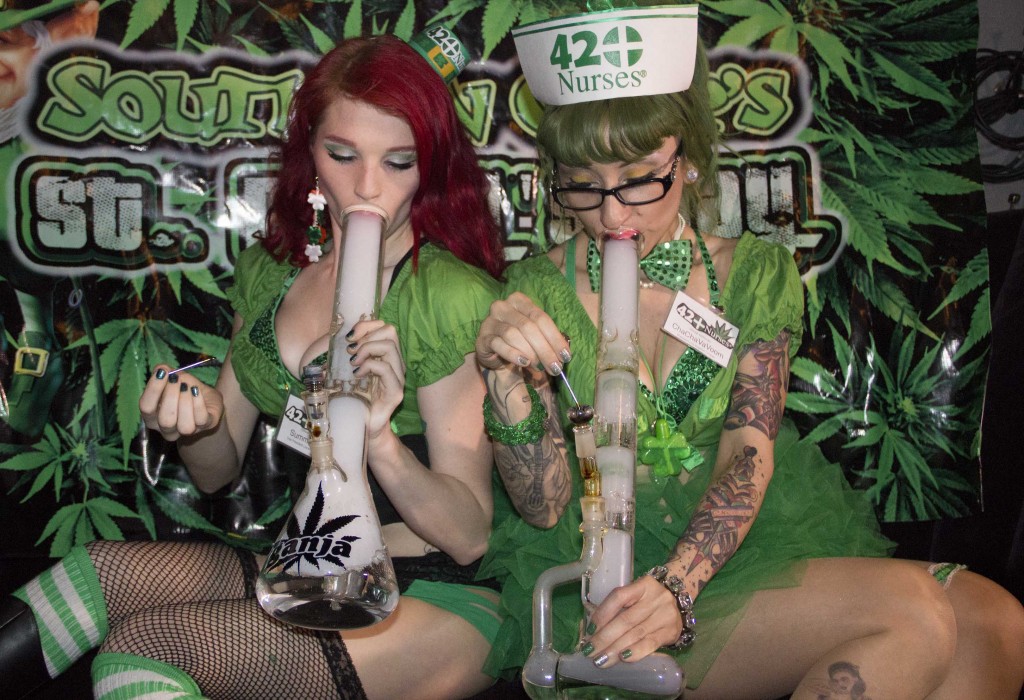 The company is 420 Nurses, a combination of word play off medicinal marijuana and a numerical sequence synonymous with pot since the 1970s.

It is a trademarked brand name that provides models, social networking and sales promotion within a quasi-legal industry, said co-founder Vanessa Sahagun.

This budding marijuana culture is poised for major growth as nationwide ballot initiatives have given citizens the right to smoke if they have a prescription, to use one ounce or less legally or to only suffer small fines in 32 states—and those users are igniting an economy. There is also hopes that you will soon be able to buy weed online like you can in Canada.

“Having it not legal—having it in a taboo manner where if you see cannabis painted on you or you’re promoting it—it changes the vibe within the room,” said 27-year-old Sahagun, who goes by the alias ChaCha VaVoom. “We keep it very 420—very friendly.”

The 420 Nurses website sells numerous items, including a line of clothing, glass pipes, jewelry and health products all based on the cannabis culture.

Sahagun said the company makes money through advertising and online sales such as modeling and photography kits for women who wish to promote themselves as 420 Nurses at related events. She said that no booking percentage is taken from models or photographers.

“420 Nurses already has that whole network set up where it’s—boom—you’re entering there, you have a dream, you’re going to promote it; it’s going to be seen,” Sahagun said. “There’s chapters in Los Angeles, San Francisco, Texas, Arizona, Washington and Colorado. Any business, model or photographer can sign up and start promoting themselves on the site. If you are interested in being a part of the network, you have to get an intern kit ($79.99 – $99.99) so you are able to promote with the group.”

Grand openings, concerts, festivals and activist events where Sahagun said those with kits gain entry and may promote their services are advertised on the website.

“The demand in creating green jobs was my spark,” she said.

“We were just putting in support for the California Cannabis Hemp initiative,” she said. “A lot of the volunteer work goes hand in hand with the activism that we do in collecting signatures and informing the people.”

California Cannabis, the Hemp Act of 2014—the so-called Jack Herer initiative after longtime critic of marijuana laws—strived to legalize all uses of hemp. It did not qualify for a spot on the ballot, according to its official website, cchi2014.org.

In cannabis activist Jack Herer’s 1985 book, “The Emperor Wears No Clothes,” he recounts a conversation he had with a high-ranking officer in the U.S. Department of Agriculture, who refused to promote Hemp because of existing laws.

“No, not even to save the world. It’s illegal. You can’t use it. Period,” Herer writes of the officer’s reply.

There continues to be prominent contemporaries who oppose legalization, including California’s Gov. Jerry Brown, who recently said on NBC’s “Meet the Press” that he believes too many “potheads” will hurt the state’s competitiveness.

Legal expert Bruce M. Margolin is an attorney who has successfully argued against punishment of those arrested under what he said he considers foggy marijuana laws for more than 40 years. He maintains a legal guide on 420laws.com to help users avoid trouble, according to his assistant Roseann Boffa.

Margolin founded the Los Angeles Chapter of National Organization of Reform of Marijuana Laws (NORML) in 1973, which supports and sponsors issues in opposition to the criminalization of cannabis.

“We are not promoting marijuana here,” he said. “But we are promoting legalizing herb and ending the criminal sanctions.”

Despite the might of Margolin and the national lobbying strides of NORML, he said his law office has been, and foretold it will remain, consistently busy.

Though these nouveau growth businesses reach skyward, traditional support for them, such as banking systems, provide a cloudy climate, even as President Barack Obama’s administration acquiesce.

“[Eric] Holder, our United States attorney general, changed his position on banks being used by these dispensaries for financial needs. To me that sounds like a conspiracy with the government. I don’t know how they can propose to continue to prosecute criminal cases when the government is in on the deal. The whole thing is so irrational,” Margolin said.

“I say [current marijuana law] is irrational and unreasonable, unfair, unjust, and arguably so out of whack that it denies due process to the public,” Margolin said. “If you act like you’re confused, don’t feel that you’re naïve or uneducated. It’s confusing.”

“MADD does not take a position on marijuana one way or the other. Our mission is to stop drunk driving, support the victims of that terrible crime and prevent underage drinking. Any form of impaired driving, including medical marijuana or prescription drugs, etc., is a safety issue of increasing public concern. Our focus is on victim services, which we provide to victims of drunk and drugged driving at no cost.”

But such legal, moral and political hindrances have not stopped ancillary businesses from blossoming around the contentious female plant.

Pelletier expounds their trademark relative to others in the industry and how frustrating it is to have their company efforts fall flat as they strive for legitimacy.

“You go to these trade shows and you won’t see that many that really go to the extent of registering the brand and really staying consistent with it,” Pelletier said. “We don’t sell weed. On our online store, you can log on and we sell marketing, we sell our cute little clothes. Even though we don’t deal with anything that is marijuana products, we’re even banned from Paypal. We just sell gear to girls. Being banned limits our ability to market and work with businesses.”

Sahagun said the company uses other services such as Square to accept credit cards and has even gone to the effort of offshore banking to keep in business.

“I love the USA and really wish I could keep my money here. Because of Paypal I am forced to get another merchant account oversees where I have to do business,” she said. “420 Nurses is affected directly because it’s not legal and we don’t even sell cannabis.”

Some critics of the company’s multimedia presence on Instagram, Facebook and other social media platforms, which are loaded with scantily-dressed young women smoking or holding nuggets of marijuana, say it’s evidence that the unintended consequences of Proposition 215, the Compassionate Use Act of 1996, has come true, while sympathizers offer an explanation.

Kellina Pelletier, Summer’s stepmother and a past Pierce College student, said she undergoes painful treatments for Lupus and a connective tissue disorder.

“I go through chemo. I go through a lot of different things, but I choose no pain pills. I myself use marijuana,” Kellina said. “[Summer] has actually educated me on different things that help me not feel pain. It makes me just relax and not be scrunched up in pain.”

Recreational use of marijuana is apparent, and users should become informed on “what’s legal, what’s not legal, what they’re allowed to do and what they’re not,” Summer said.

“For a parent it’s a double edged sword. I see what they are doing. I see their advocacy. I see their inner views. I see her researching and everything that she studies,” Kellina said. “They’re young and they’re good looking, and sex sells, so they dress more provocatively to bring attention to their cause.”

420 Nurses empowers women, said Sahagun and Pelletier, to want to improve their appearance, to be more confident, to learn and to write about the issues and bridge the generational gap between older “hippies” and the youthful marijuana culture.

“The negativity—of course you put yourself out there and people will judge you no matter what and that’s the reality of it,” Sahagun said. “It’s really how you maintain it and how you manage and how you are going to take it.”

For The Love Of The Horse