Home Mini profiles From the punk show to the classroom

Blue dyed hair, skin-tight jeans, ear piercings, skull tattoos and fast-paced strumming of guitar strings- these are just some of the elements found at an everyday punk rock show, but for Engish Professor Paul Rauch when he was a singer and guitarist for the 80s and 90s punk band “Still Life,” the vibe was much different.

“No, we didn’t have makeup. That scene or the music scene that we were part of was decidedly down to earth to where there wasn’t a lot of dressing up. I would just wear my converse, my jeans, and a shirt. It wasn’t that kind of punk rock.”

Rauch sits in his office where he’s been as a Pierce College Professor since 2015, with records from his own band cascaded across his desk. The records vary in size but all share photos of scenic portraits filtered black and white.

Across his desk to the upper right of his computer hangs a portrait of acclaimed British author Samuel Beckett. Although the pairing of classic literature and punk rock seem uncanny to some, Rauch sees the resemblance.

“I feel like there’s something punk rock about Samuel Beckett’s writing. The way he writes reminds me of that feeling that I got from reading the lyrics when I was younger. Challenging perception and challenging the status quo, all that kind of stuff.” Rauch added, “Literature feels, kind of punk rock in general, there’s something kind of, I don’t know if I want to say subversive, but something very independent about literature.”

Before professor Rauch became the professor he is today, he was the co-founder of the punk band “Still Life.”

Rauch said he wanted to be a performer of some kind since he was a child.

“I had been into music from a young age. I felt like I wanted to play music probably since around the early eighties, I listened to the radio and had like favorite bands and spent my allowance on records and stuff like that. As a little kid, I was a huge Journey fan. I would be in my room, lip singing or horribly singing along to their albums,” Rauch said.

Rauch and his band once toured all across the country. Although he has now performed countless times, Rauch explained anxiety always played a factor in his performances.

“I would get really nervous before shows, but then always afterward I was so glad that we did it. Like the experience itself was so much fun and that it overrode all the nerves I had leading up. So it was always a cycle like that for me. Being a little bit nervous about the performance but then having so much fun,” Rauch said.

Rauch explained that performing was always one of his favorite aspects of the band. The feeling he’d get on stage is something unparalleled.

“When I would perform it kind of felt like a rocket ship blasting off or something and going on a ride through space and then coming back and landing,” Rauch said.

Rauch discovered English as a potential career as a result of necessity. The band wasn’t allocating enough funds to live on and he needed another option. Rauch attended Pierce College in the late 1990s where he discovered his love for literature.

“At the time I was still thinking of my band and what we were going to be doing. So I had considered teaching as a more responsible career.”

Rauch explained when he began attending Pierce he started as a liberal arts major and within two semesters, partway through English 101, he changed his major to English, which he now teaches today.

Michael Urquidez, Pierce College Professor of English, has shared an office with Rauch since they were both hired together.

Urquidez said they share a bond in there love for punk music.

“We both grew up kind of listening to punk rock music. And I think that that kind of found its way into how we teach. We want students to be very independent and critical thinkers and to question things. I think a lot of punk rock is questioning societal norms. We talk all the time about how that punk rock background shapes our approaches to teaching and it’s been great,” Urquidez said.

Lorenzo Mangantulo, an International Pierce College student, has had Professor Rauch for English 101. He said his teaching style is very laid back.

“He’s a cool professor and he really cares for his students. He gives you a lot of chances. He understands like not everyone’s good at English. He’ll give you those chances and students who are not good at English, like me, he works hard to help,” Mangantulo said.

The vivacious and aggressive nature of punk shows seem like the antithesis to the quiet and calm nature of most college classroom settings. But for Professor Rauch, the excitement is still there.

“Teaching can sometimes feel kind of like a blur, in a sense, where it’s the beginning of the class I’m nervous about how it’s going to go, and once it starts it is pretty similar to feeling like it’s ‘blasting off’ and then, even I’m along for the ride.” 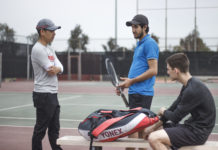 The Long Way Dao-wn the Road 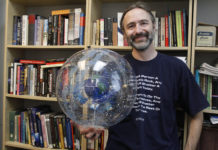 An Out of this Galaxy Professor