Today’s clowns aren’t as scary as you might think

A group of children sat together on a lawn and watch as a man in a checkered shirt and polka dot pants juggles red and yellow bowling pins.

The clown cried out that he doesn’t know how to stop juggling, and his audience of children and adults laughed at his predicament.

Pretend tears, real laughter and wild juggling— just another day in the life of Gilly the Clown.

Gilly, whose real name is Guilford Adams, has been a professional clown for almost 20 years and has performed more than 3,000 kid parties.

“As a clown, you’re trying to reach the largest group of people. You’re trying to bring smiles and a sense of humor to the human existence that we call life,” Adams said.

Born and raised in Texas, Adams became interested in clowns as a teenager. His local church had a clown ministry, where magicians and clowns would perform for children and the elderly. Inspired by these performances, Adams committed himself to the craft.

“I did my first show in a nursing home for an old lady. I remember taking a pair of Air Jordans that I had, taping them up, spray painting them and creating my own clown shoes and costume,” Adams said.

World Clown Association Director Dean Cotton runs a clown ministry in Fayetteville, Georgia. Cotton explained how the art of clowning can be combined with Christian ministry.

“Clowns can be used to draw people and provide opportunities for relationships to form between people,” Cotton said. “Clowning can be used to teach a lesson from the Bible. At my church, we sometimes introduce the Sunday School lesson for the day using an object lesson or skit during the group opening session with all the children.”

When he got to high school, Adams became more focused on sports and dropped the act. But as an adult, he gravitated back toward clowning and decided to audition for the famous Ringling Bros. and Barnum & Bailey Clown College in 1997.

He wasn’t accepted, though even if he had it wouldn’t have made much of a difference because the college closed down later that year.

Although Ringling Bros. had one of the most prestigious clown colleges in the world, Adams said that their training and showmanship is different from the kind of performances that he prefers.

“Most Ringling clowns that I know do not have a giant skillset to deal with children, because the people are so far away, so you don’t really interact with them,” Adams said. “In a lot of ways the things that people associate with clowns, like balloon animals or gentle word play, they don’t do that.”

Adams moved to Los Angeles in 2000 to pursue an acting career. Wanting to make money between auditions, he joined a clown company and began performing at parties.

Adams had learned his tricks largely on the job and from experience, and it was during his early years of performing that he created “Gilly.” It isn’t a single, unchanging character. There are multiple personas, such as Doctor Gilly, Cowboy Gilly and Light Face Gilly and so on.

In a digital age where so much entertainment comes from the Internet or television, Adams stressed the importance of exposing young children to live performances.

“They watch TV. Everything now is given to you through a two-dimensional phone or video,” Adams said. “ I think there’s something very vital about that. Live performances are something real. We’re an active part of it. Kids, especially, don’t have that anymore.”

When most people think of clowns, they imagine a fully painted face and a wacky wig. But when Adams performs for kids, he uses only a little makeup around his eyes and he wears the signature red nose.

Adams also adjusts his personality based on the age of his primary audience.

“I try to be more compassionate for younger kids. A little more higher pitched and more agreeable,” Adams said. “But I’ll be a little more laid back and settled with older kids.”

Hecklers or other rude audience members might give Adams a hard time during a performance. When this happens, he tries to ignore them.

“I just talk to people who are more receptive. It’s a lot like anything you do in any profession. You gravitate toward people who are willing to listen,” Adams said. “When I have people who don’t want to listen or use the opportunity to act out, I just steer myself toward other kids that are interested. Kids will warm up.”

Adams believes that disliking clowns is a popular norm in today’s society, but it also one that lacks justification.

“I’ve been saying I hate Nickelback for as long as I could remember, and I couldn’t even tell you three of their songs. But I’m told I should hate them. I think a lot of people fall into that category with clowns,” Adams said. “I don’t fault people all that much for it, because no one is really championing clowns.”

Assistant Professor of Cinema Ken Windrum said that before the 1990 TV miniseries IT, clowns in cinema were portrayed as complex yet sympathetic characters. The image of a clown being an evil or menacing figure is a relatively recent phenomenon.

“[In old movies] clowns were shown as dual-natured. They have their persona as a clown, but then they’re often shown as being sad or tragic individuals,” Windrum said. “I can’t think of any sinister or evil clowns until 20, 30 years ago.”

In the past, clowns such as Bozo or Ronald McDonald gave the profession a light-hearted and positive image. Today, there are few positive role model clowns, which Adams believes is the reason for the strong negative associations with his profession.

“In 2019, the only clowns you see are scary looking, like Pennywise and the Joker,” Adams said. “I wonder if clowns in their own way are like indicators of what society is going through. We personalize our frustrations and anxieties in this sort of anonymous face-painted person.”

But the negative perception of clowning hasn’t stopped Adams from getting gigs on TV shows such as Modern Family and Glee. He has also starred in more than three dozen commercials and acted in segments for Disney and Buzzfeed.

Yet, when he’s a clown on set, Adams has a strange feeling of detachment from his fellow coworkers.

“There’s like this extra layer of anonymity,” Adams said. “Because you’re not you—you’re in character. I’m not Guilford Adams. I’m Gilly. I go by ‘Gilly.’ People don’t quite know who you are. More often than not, when I’m a clown on set, my actions are very surface level with people.”

Even though Adams loves acting on television, he prefers to have a live audience, because it gives him the opportunity to improvise and be interactive.

“As a clown, there’s a slightly richer experience being on stage or being in front of people, because clowns don’t have a wall,” Adams said. “You need to have audience interactions, whereas with an actor you could operate with a wall.”

As a man in love with his profession, Adams said the best part of his job is the simple sound of laughter, and added.

“The fuel you get from making somebody else laugh, it’s such a unique experience,” he said.

To hear what the Pierce College Community thinks about clowns, listen to the KPCRadio.com audio package by member, Maja 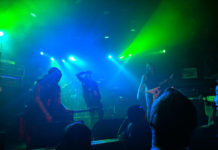